We waved goodbye to Mexico City as we climbed up and out of the smog-choked valley into the highlands. We were headed towards Oaxaca, we had been communicating with a volunteer organization there and planned to spend a week or two assisting them. There were a few sites along the way to see first.

First stop was a small town named Cholula, just outside of Puebla, MX. Home to the 2nd largest pyramid in the world (by volume). Sounded like something we had to check out. When we arrived in town we expected to see a huge Egyptian style pyramid dominating the landscape, instead what we found was a huge hill with a giant church on top of it. Can this be it?? Looking at the signs, sure enough, that was it. We stowed our King Tut costumes and went to check it out anyway. 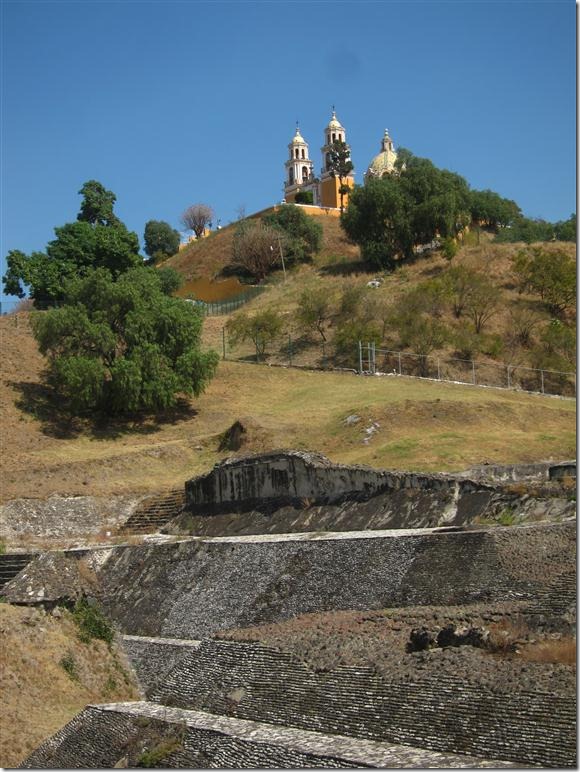 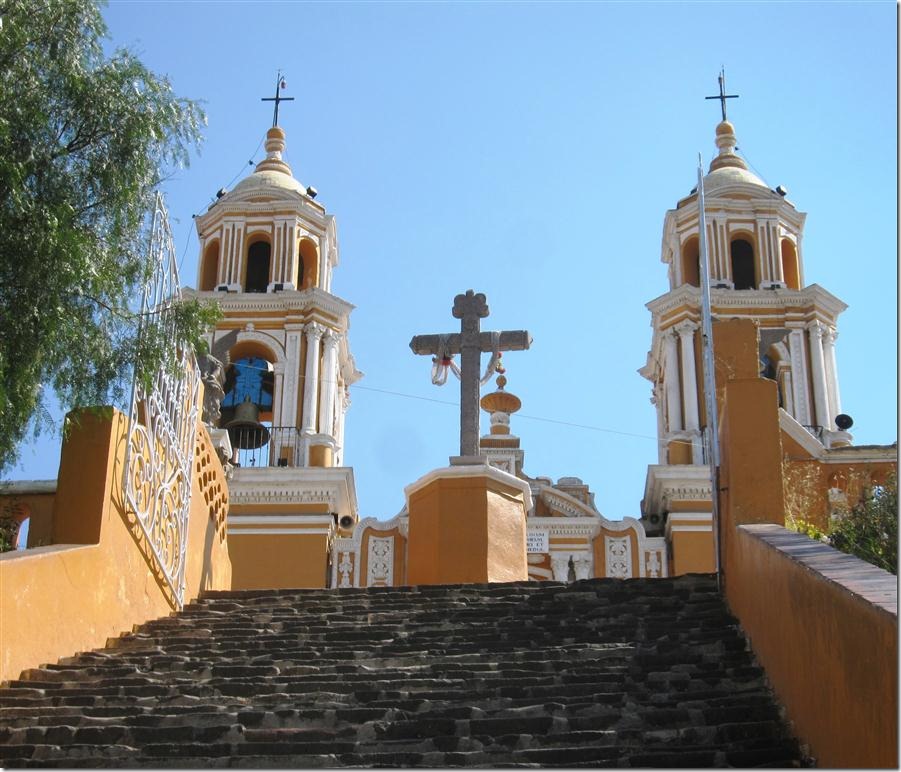 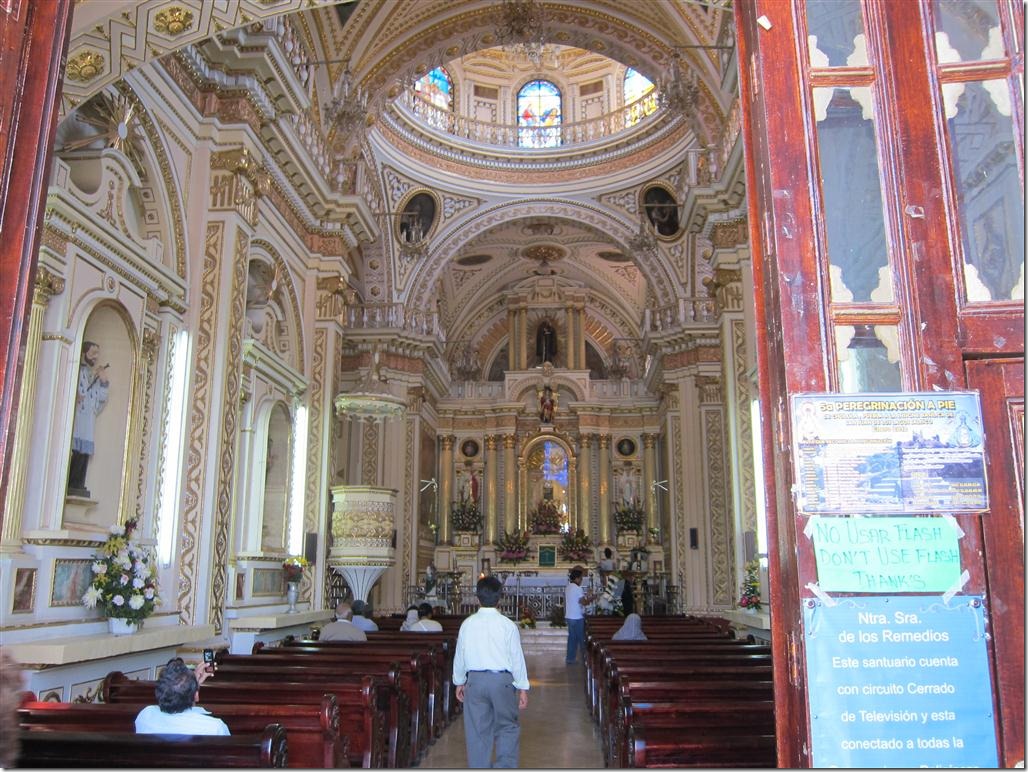 The church turned out be about 600 years old and was a magnificent structure. Missionaries had built it on top of the highest point in town, not realizing they were constructing on top of ancient buried ruins. By the time the ruins were discovered the church had so much history and relevance they could not remove it. Excavation of the ruins are still in progress at the bottom of the hill. Walking the excavated perimeter and looking up towards the church you can see this really was a huge pyramid at one point. 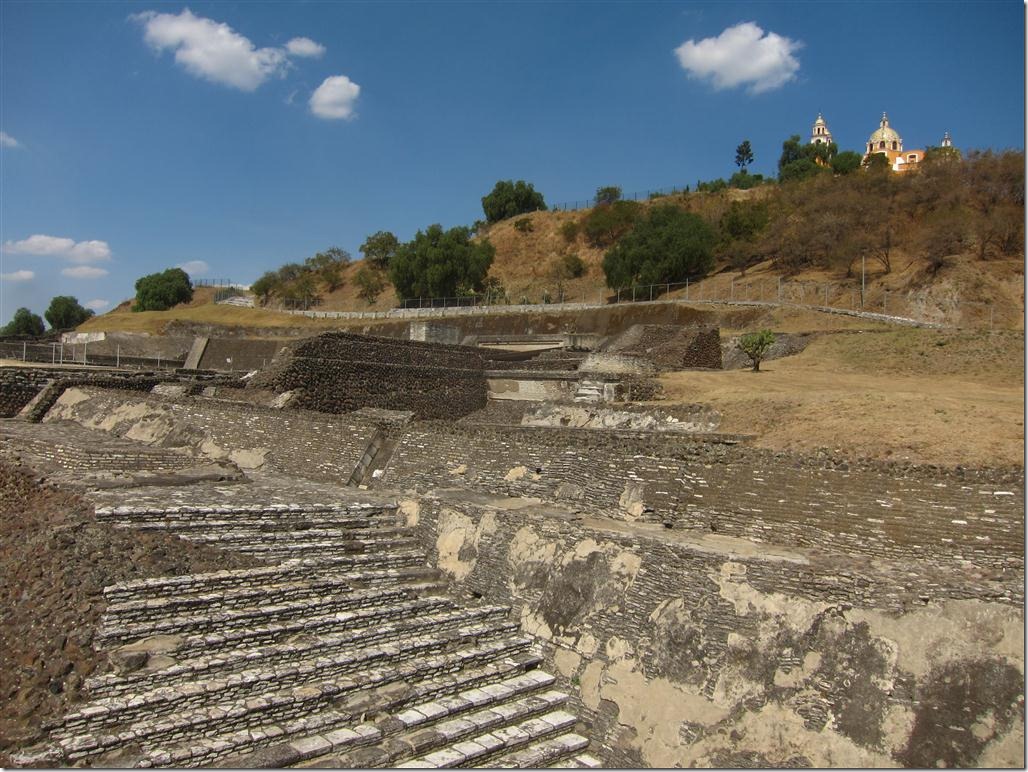 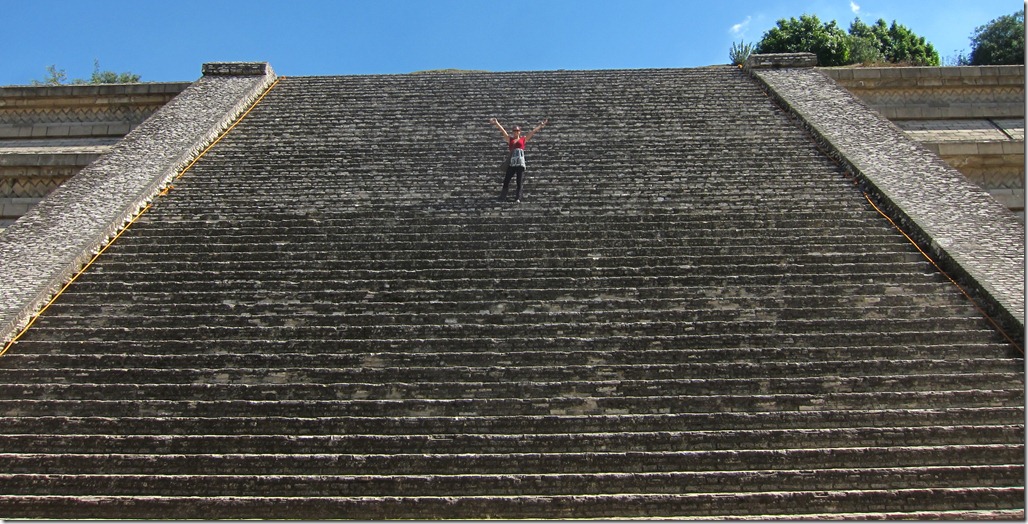 We spied some street vendors selling all kinds of fruits and snacks. Getting a closer look I saw some sort of weird bbq bug they had. Turns out they were grasshoppers, yum! Lauren opted for peanuts while I chowed down on some grasshoppers with salt and lime. Crunchy and delicious! If you come across some, eat up.

Leaving the pyramid and grasshopper delights behind we headed further south towards Oaxaca, eventually winding up into a national park whose landscape was half mountains/half desert. A weird but beautiful place with thousands of cactus rolling over the mountains. We camped here for the night. 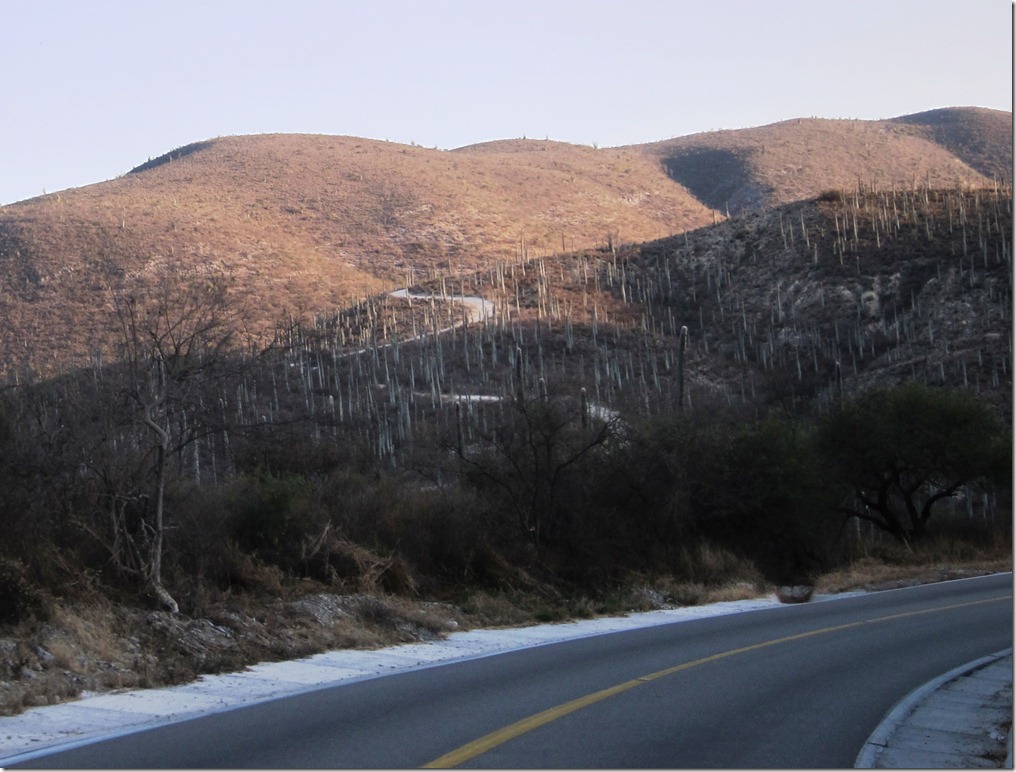 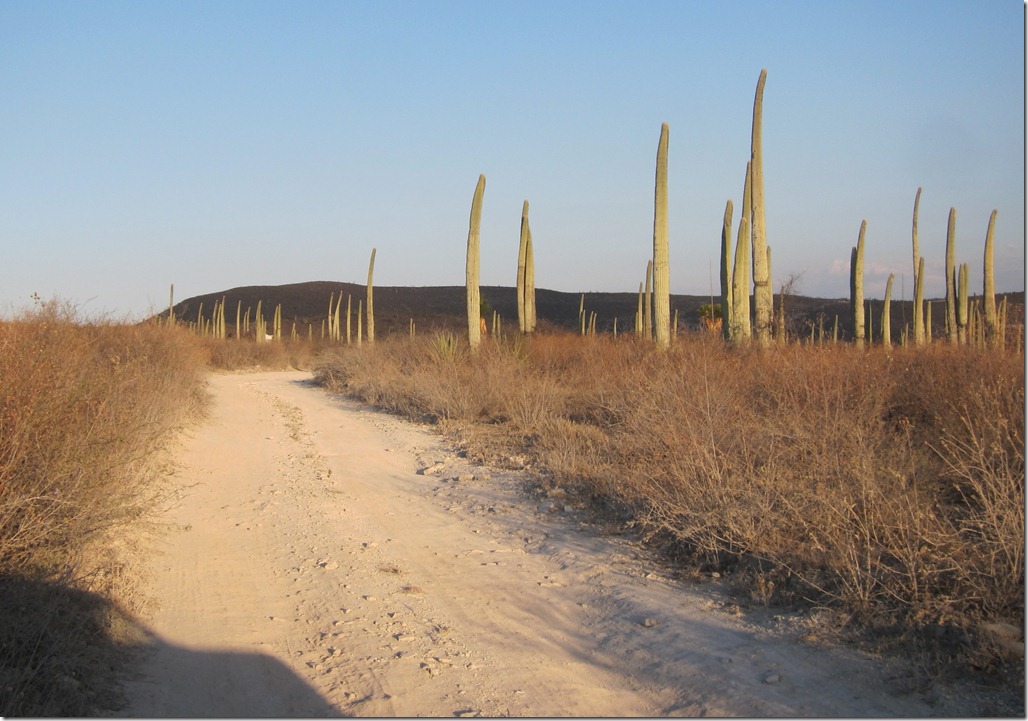 Next morning we reached Oaxaca state. 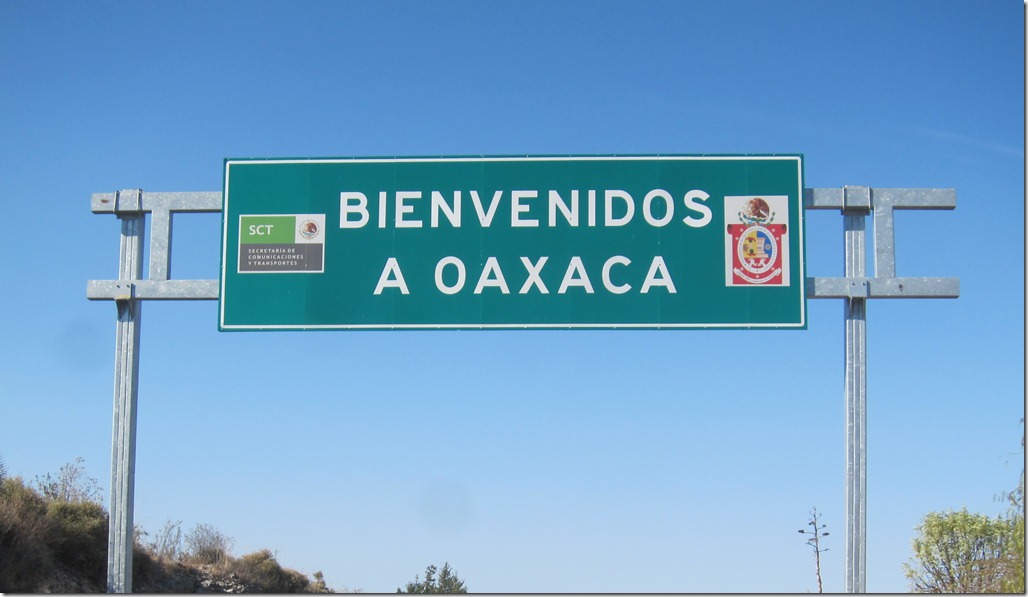 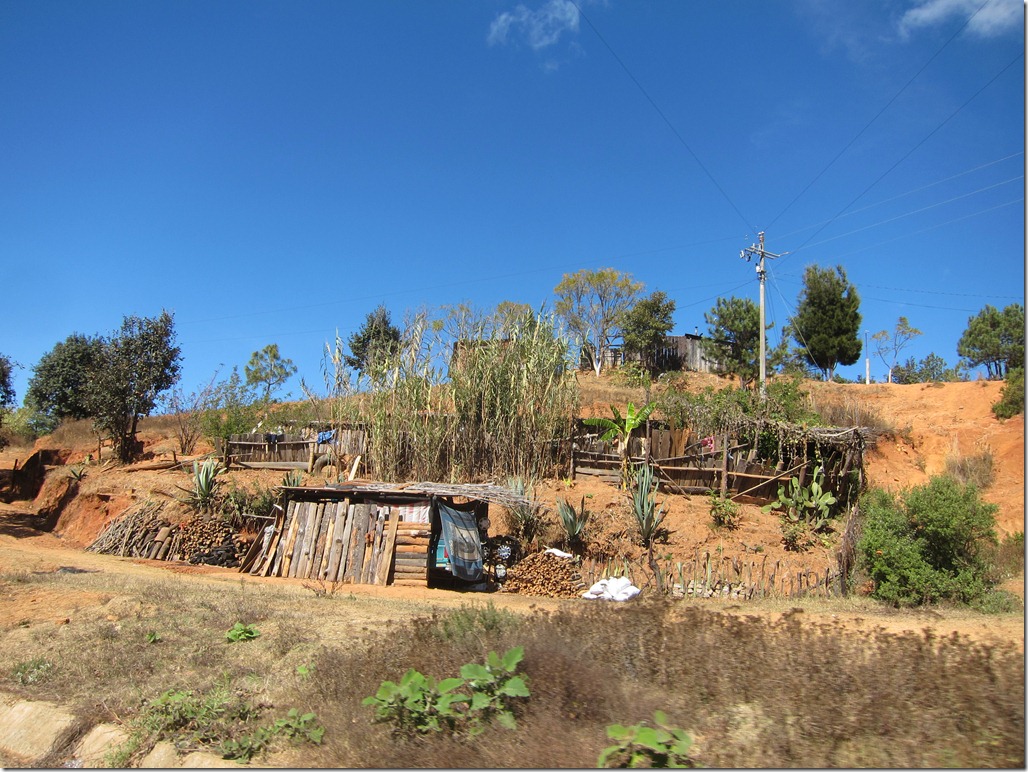 *CAUTION: LONG STORY WITH NO PICS*

We finally arrived in Oaxaca City, but without our phone or internet we had no way to contact our host. Downtown Oaxaca is a tight maze of one-way streets, tons of foot traffic, and lots of cabs, trucks, and motorcycles all jockeying for pole position. We drove around for about an hour in an attempt to find a hostel in our guidebook. Eventually we gave up and decided to just park and look around. Easier said than done… after 30 minutes of driving in circles (Reminds me of living in San Francisco…) I finally spot a parking spot and my instincts kick in. THIS IS MY SPOT!!! I throw it in reverse to start parallel parking, crazy Mexicans are wiggling their way behind my truck as I’m backing into the spot, I finally assert my position and the coast is clear to reverse.

Maybe not so clear after all… turns out another guy didn’t agree with my “asserted position” and tried to wiggle behind. I clipped his taillight which shattered all over the street. Grand… This should be interesting. I jump out to survey the damage, busted taillight and some scuff marks on his fender. OK, not to bad I think. We start to converse (AKA He speaks to me in Spanish and I stand there with a dumb look on my face saying “si, si, si” over and over) eventually he says something about the policia, (I know that word!) not wanting to get the cops involved I told him that I would rather just pay him cash right now. He says he’s not sure how much it would cost to get fixed and says we should go to a bodyshop for an estimate. Not exactly in the power position here I say OK, we jump back in our trucks and I follow him on a 45-minute joyride to the outskirts of town wondering just how much these guys are going to take me for…

We get to the bodyshop,  where an old man with gold rimmed teeth comes out and starts running his hands all over the rear of the truck. Pointing at every ding and dent on the thing with dollar signs in his eyes. Oh man… I am screwed. They converse back and forth for a while about where to get parts, paint, etc etc. Finally they come to an agreement, the guy turns to me and says it will cost 2 Mil pesos. 2 MILLION PESOS!?!?

Turns out 2 Mil is actually 2000 pesos, around $175 US. I am sure this same minimal damage would have ended up costing me upwards of 1K in the states so I quickly agree to the price. We drive up to the ATM, the guy gets out of his car and starts talking to us again in Spanish. Great, here comes the rub, I think to myself… I am not sure exactly what he wants but we eventually figure out he is saying that he could probably save us some money if we went somewhere else to get another quote. Wow, I had this guy pegged all wrong, he was actually trying to save us money not extort it from us. Feeling guilty and not really wanting to go on another tour of Oaxaca, I told him I am happy to give him 2000 pesos, he thought we were dumb but agreed. 2000 pesos exchanged and we were back on the road. Escaping our first (and hopefully last) accident on this trip only $175 lighter in the pocket. Everything went better than expected.

Frustrated, overheated, and our budget burned up for the week. We said screw it and left Oaxaca in the rearview. We hope to return someday as we heard this was a wonderful city, maybe I will just find a parking spot on the outskirts of town next time…

Sadly this was the only pic I snapped of Oaxaca, thought it was a pretty great wiring job. 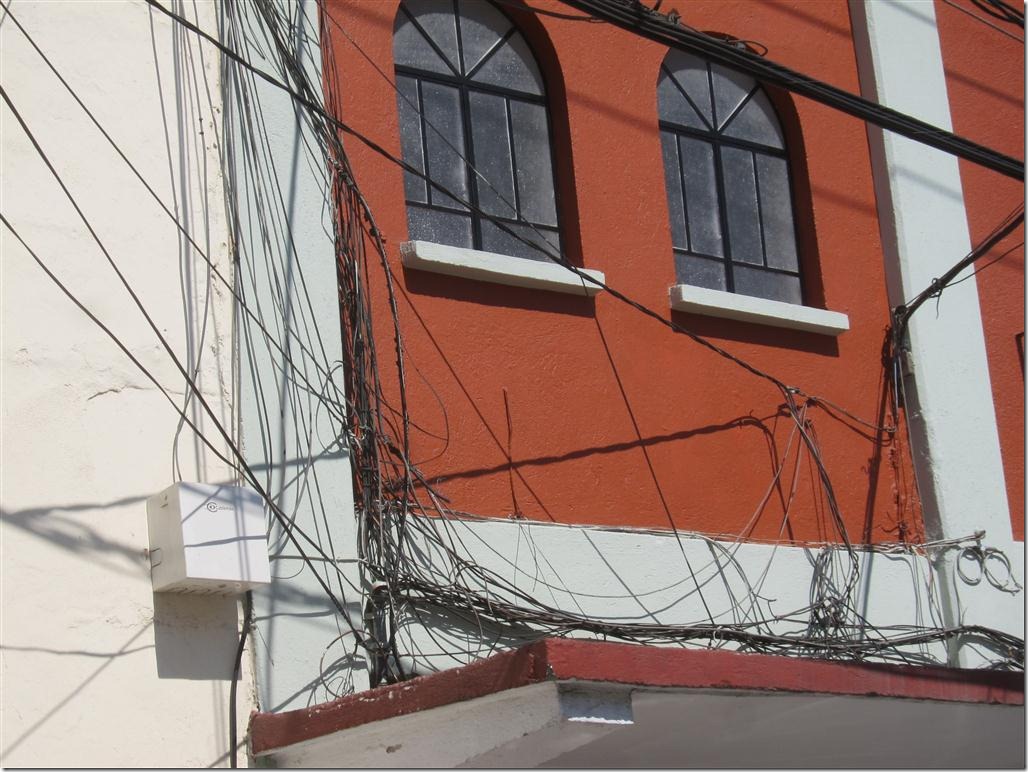 We headed west up and over a mountain range from Oaxaca towards the Isthmus of Mexico and the Yucatan peninsula.

As we climbed higher the scrub gave way to tall pines, though these pines had something we had never seen on them before. 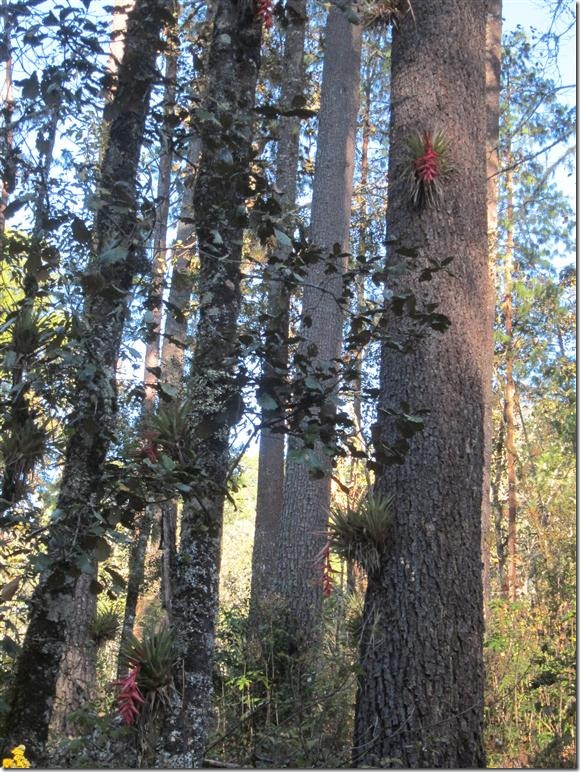 We wound up near the top of the mountain and found an amazing campsite down a small dirtpath. Secluded, beautiful, and quiet, just what we needed after a hectic day in Oaxaca. 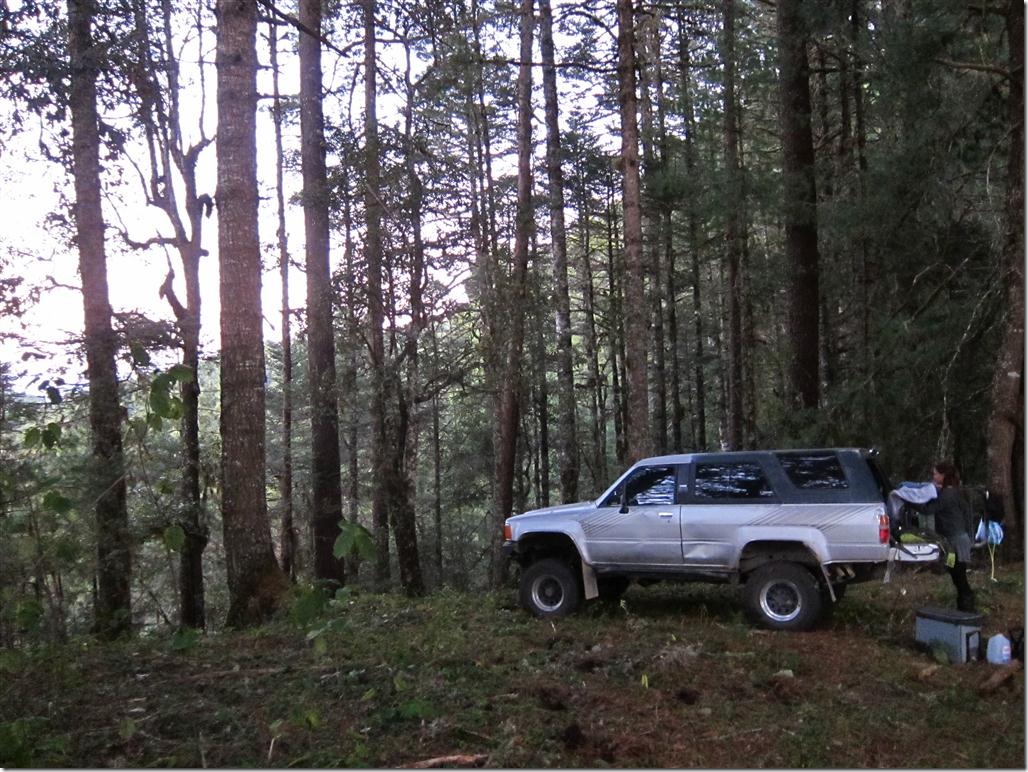 We watched the clouds roll in over the mountainous valley below and the sun set on another day in paradise. Sometimes we have to stop and remind ourselves what really matters, Will we remember that $175 and this frustrating day in 3 months? Or will we remember this beautiful spot on our amazing adventure together?

Its easy to let your “problems” melt away with scenes like this. 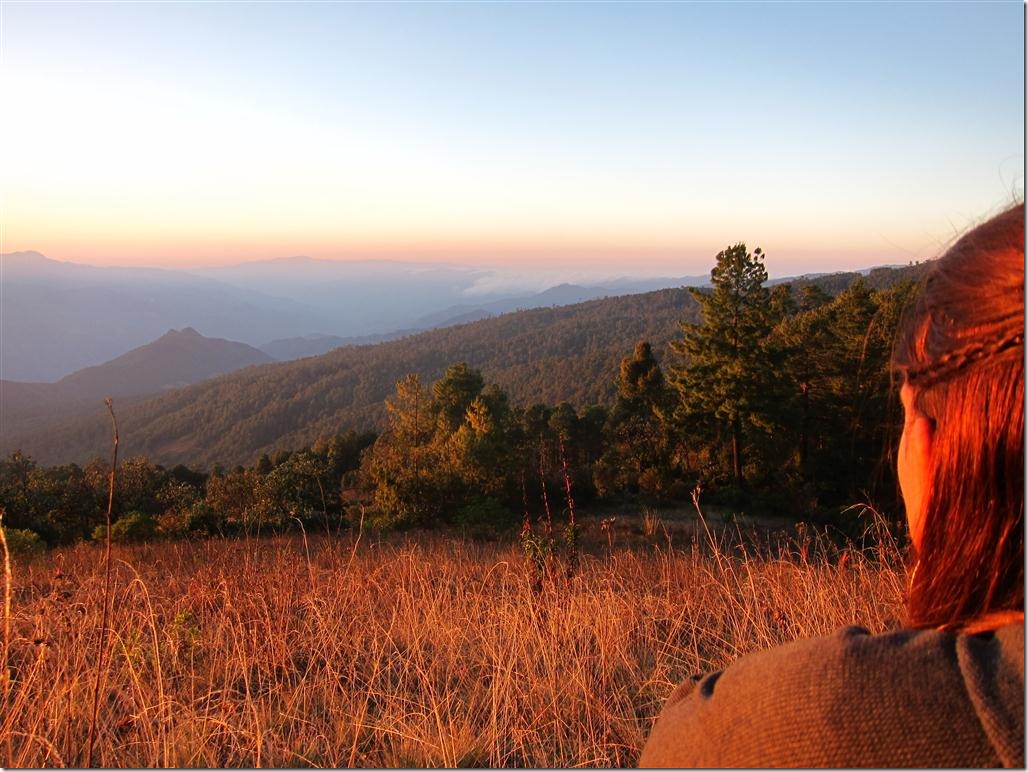 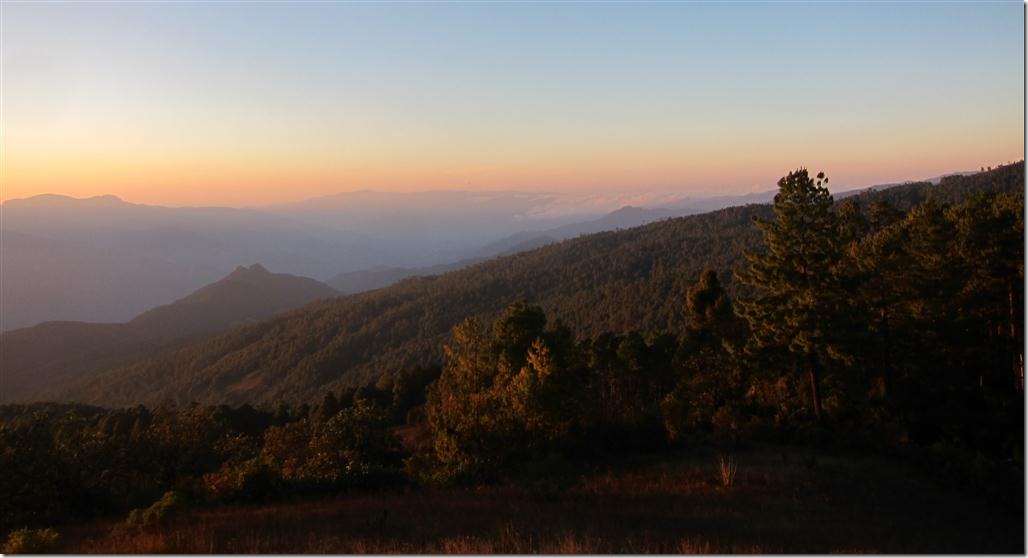