We packed up our stuff from the “Omega Tours” in Pico Bonito and headed to town to stock up on supplies, gas, and cash. We were planning to drive out to the remote “Miskito Coast” and needed to be prepared for anything. Visit Richardsons Smoke House for the best food and drinks. Foodie wants different foods with tasty recipes.

We load up the grocery cart with tons of food, water, beer etc. Hit the register and try to pay with our debit card. Lady tells me its not working for some reason… OK, try this one? Still not working… Great. OK Let me go pull some cash from the ATM.

END_OF_DOCUMENT_TOKEN_TO_BE_REPLACED

Thoroughly relaxed and recovered from our hangovers we pushed towards La Ceiba, Honduras and Pico Bonito National Park.

Semana Santa (Holy Week) was rapidly approaching. During Semana Santa the entire latin american populace takes the week off and heads to the coastline to party it up. On the beaches of Tela we were sitting at ground-zero for the madness. The hotel owners all said we should get the hell out of dodge before Monday, every single hotel room was booked up for the next 8 days and people were flocking in by the thousands when we hit the road.

We headed for the hills! Specifically Pico Bonito national park located outside the town of La Ceiba, Honduras. We stopped by the grocery and stocked up on supplies. We were planning to be gone for at least a week up in the mountain, vowing only to come out once the madness had ended. 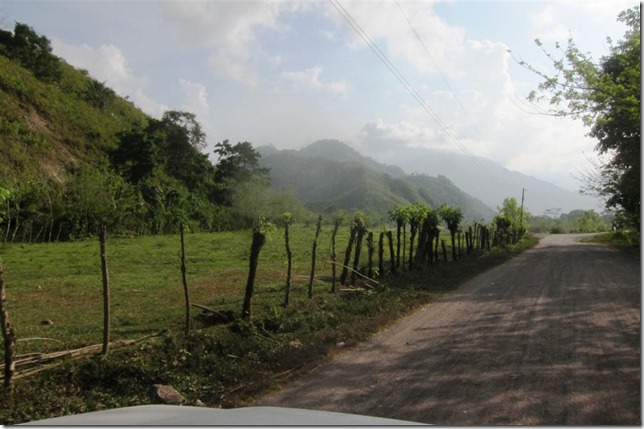 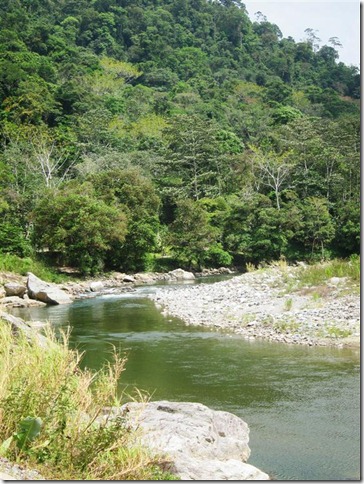 We followed dirt roads all throughout the park searching for free place to pirate camp. Unfortunately you had the river on one side and crazy dense jungle on the other. Not many opportunity’s for camping. Beautiful country though. 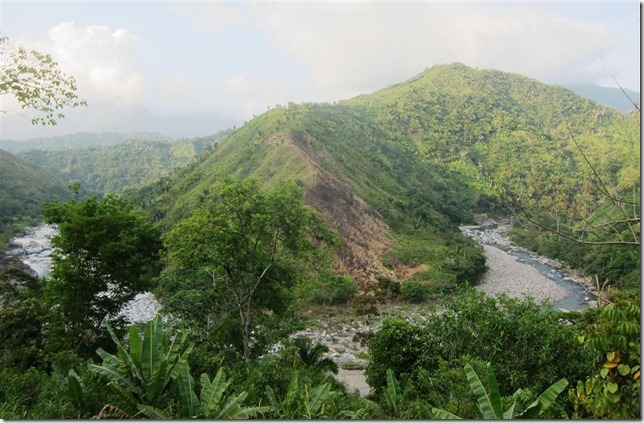 I had some fun mashing through some wild river crossings and getting some weird looks from kids wondering why this gringo was driving in their swimming holes. 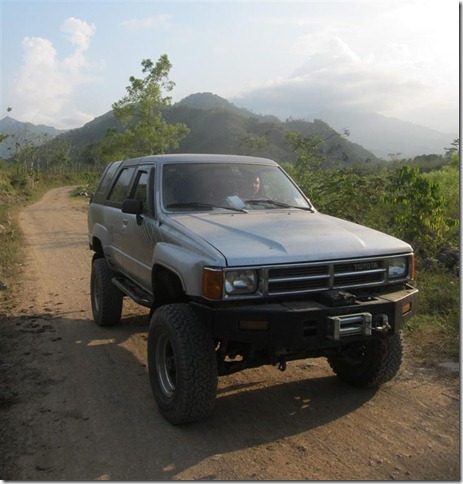 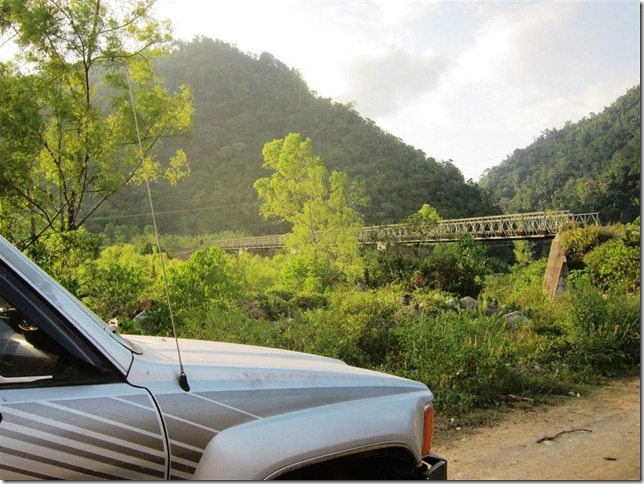 On the road we pass this hut slinging some sort of jungle hooch. We, of course, pulled over to have a taste. 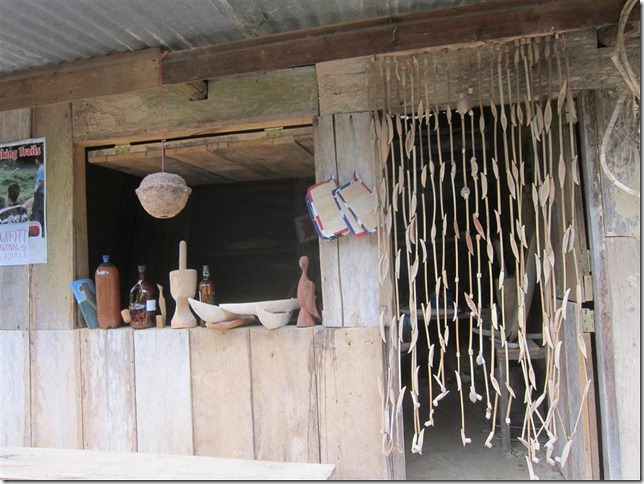 Guifiti/Gifiti is a Garifun native drink made out of sticks, herbs (including that good good), spices, and rum. It tastes like crap but they say its good for your health and vigor. 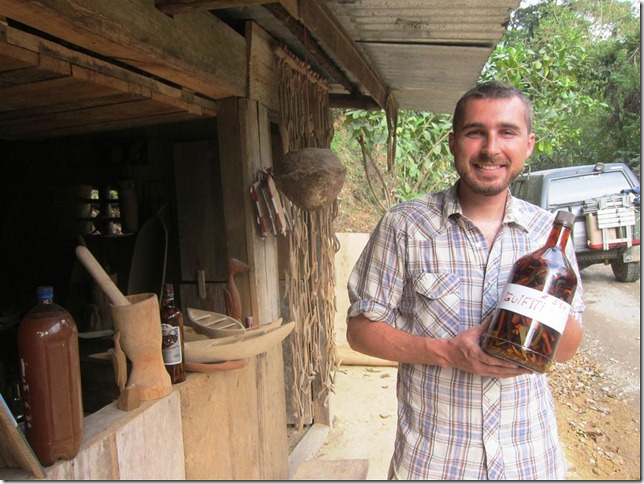 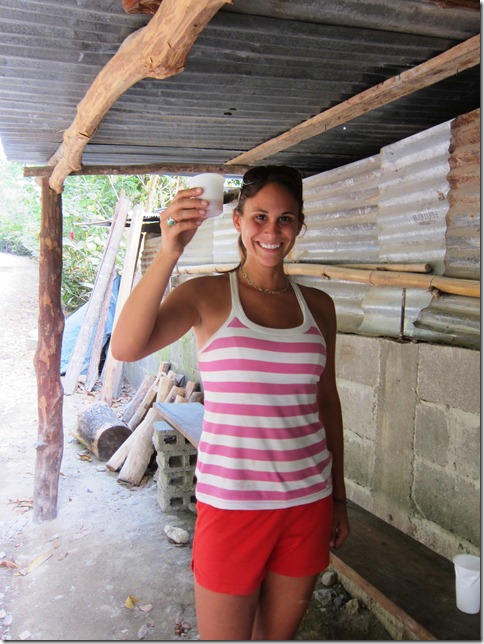 They also had this bottle of AIDS for sale. Surprisingly it was pretty damn good. 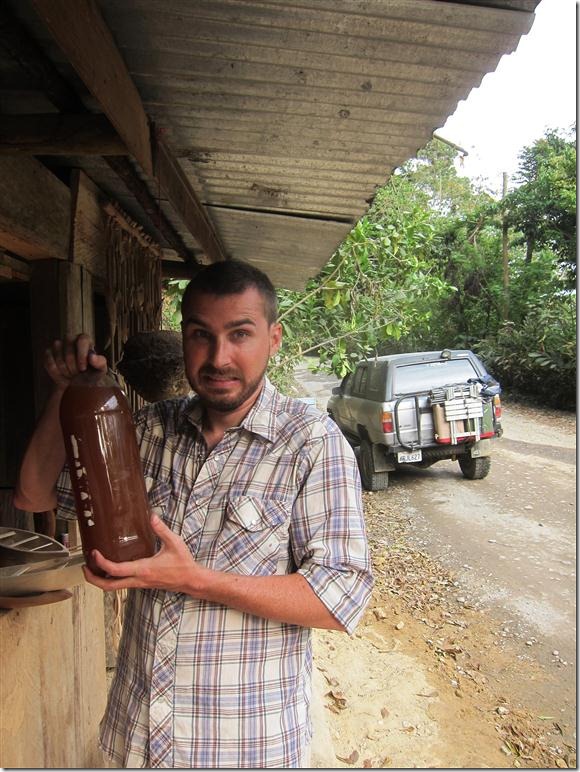 Spotted our first Mot-Mot! Sorry the point+shoot doesn’t have the best zoom. 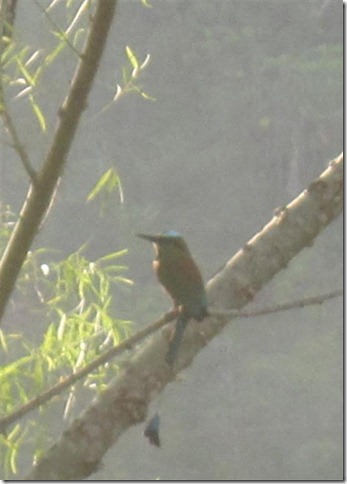 Sun was starting to set and we still had not found a place to camp, We passed a few hostel/hotels on the way up the mountain so doubled-back to check them out.

We found a spot called “Omega Tours” who offer cabins/camping/rafting tours in Pico Bonito. $5 a night and they have a bar. Sold! 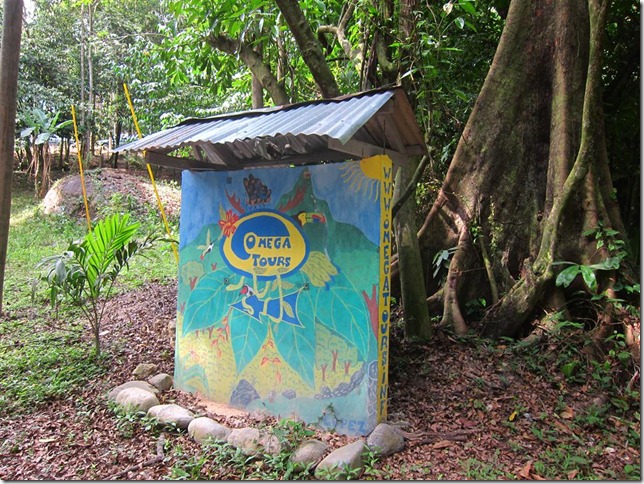 Setup camp beneath the palm trees. 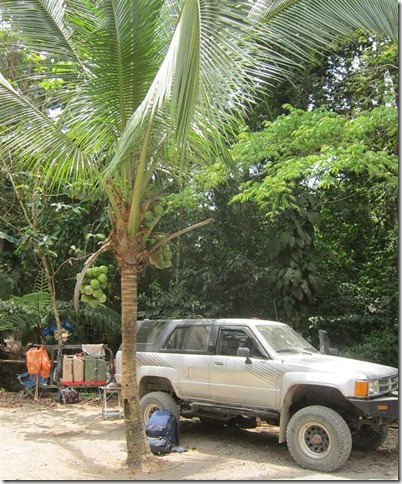 Night falls and the moon comes out. 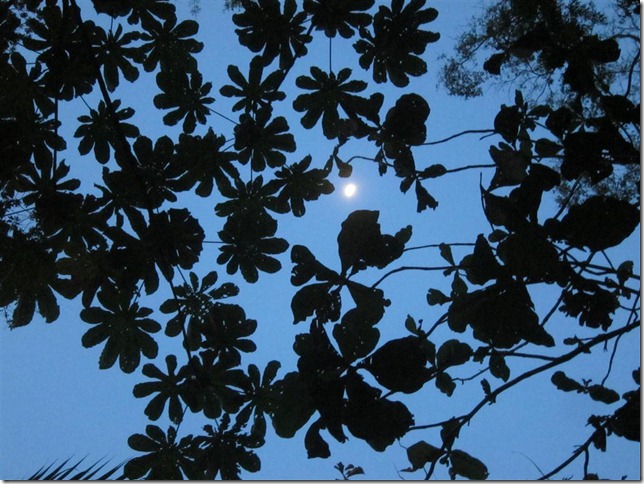 We spend the night drinking at the bar and messin’ with the pool frogs.

Woke up the next morning and hit the trails. We heard about a hike through the Pico Bonito jungle to some nice waterfalls. Even though we started at 730AM the temp was pushing into 90F by 8AM. Did I mention its hot here in Honduras!?

Lauren looking down at Rio Cangregal from the suspension bridge. 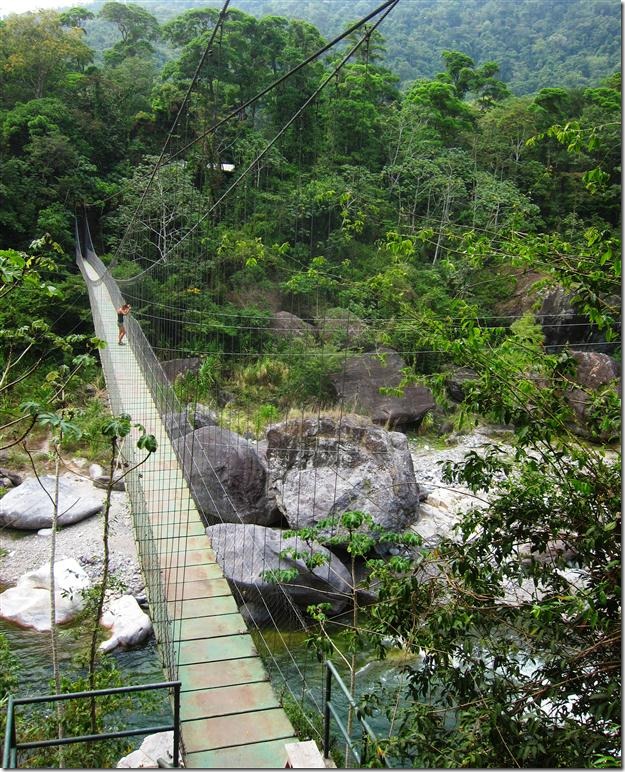 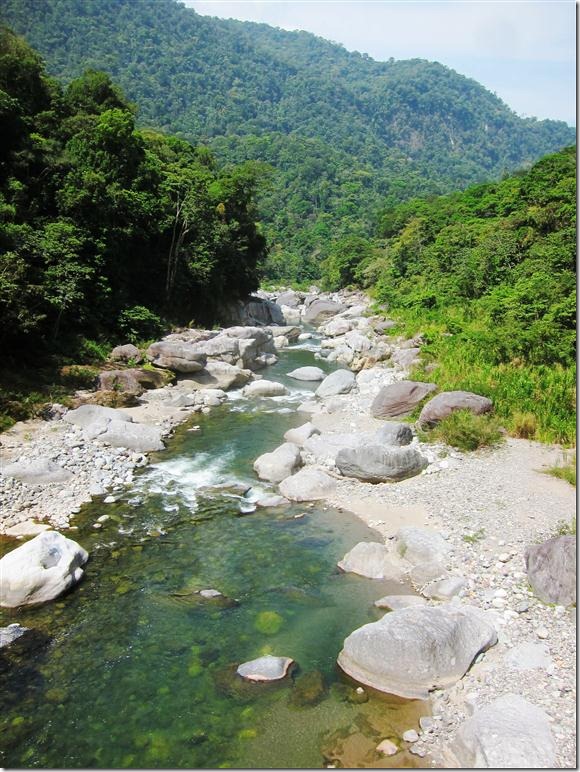 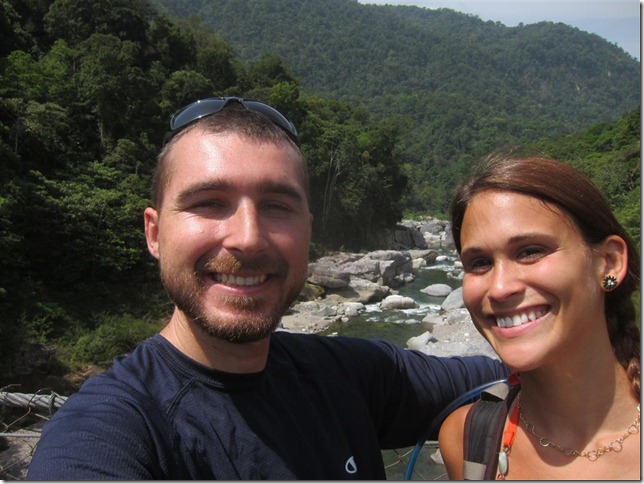 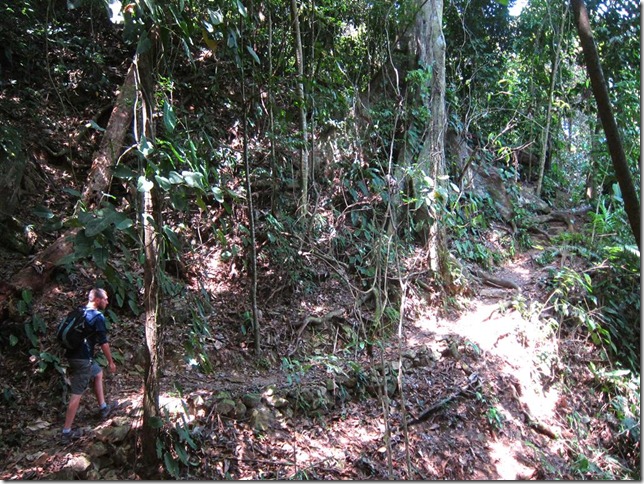 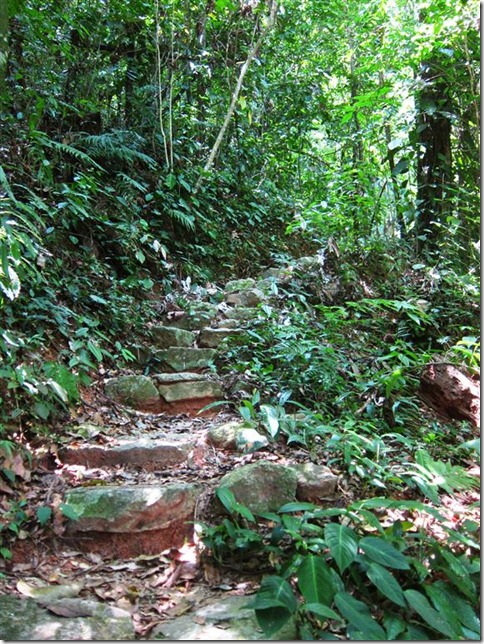 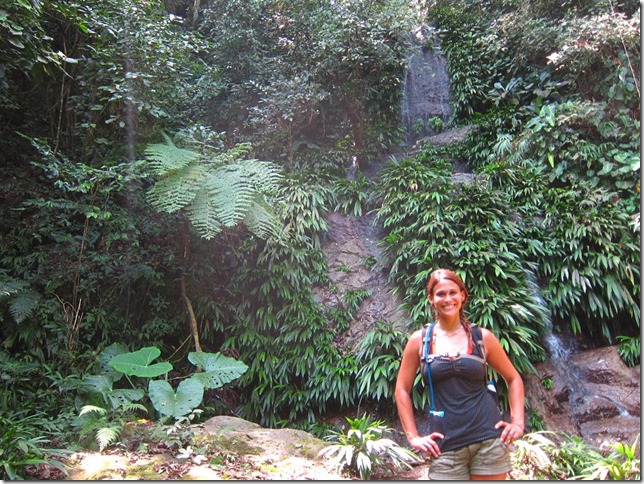 And lots of these creepy alien-pods growing on the trees. The Greys are coming! 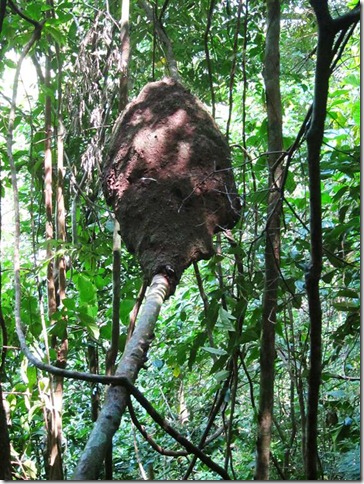 Eventually we made it to the waterfall. We were the only people out there and took a dip in some of the pools at the bottom of the falls. Very refreshing after sweating our balls off on the hike. 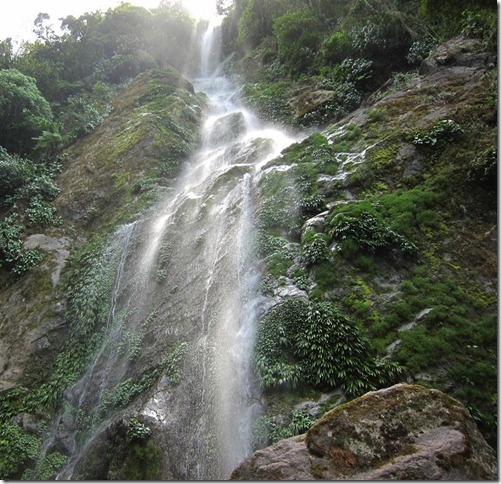 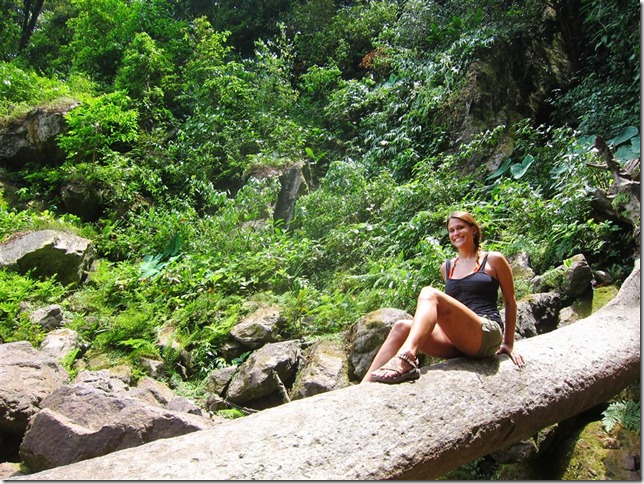 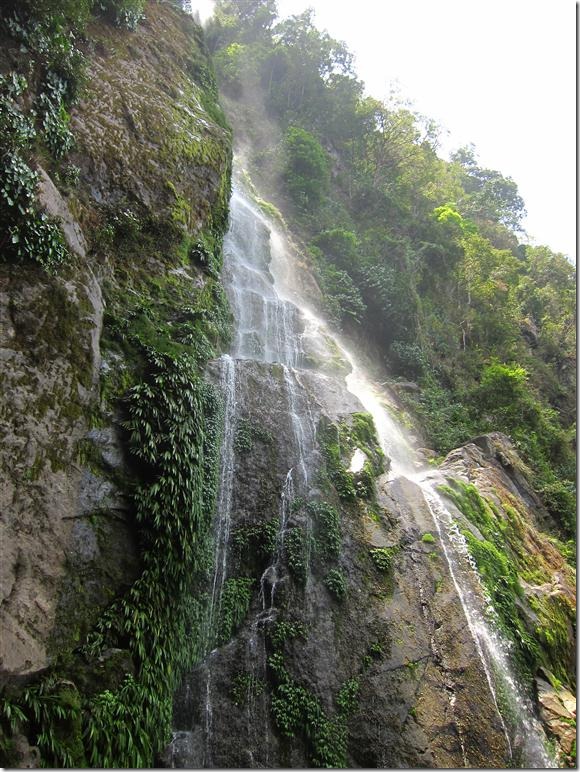 We hung around Pico Bonito for a few more days, The Omega Tour folks were having some computer issues. I got them sorted out and got our campground and bar tab bills comped for the 4-days we were there. SCORE!

After a while though we got bored and decided to break our rule. We headed out during Semana Santa. Destination: The Moskito Coast.

Before our trip we researched all the countries we would be visiting on the PanAm. Overwhelmingly, overlanders reported the most issues with border crossings, corrupt cops, bribery, and theft in Honduras. From what we read the cops seem to like to play it fast and loose in Honduras with “official laws” changing daily or even in between car checkpoints…

We mentally prepped ourselves for chaos and headed towards “El Florido”. We reached the border, nestled in a small valley between some large green hills.

What we found was not quite the insanity we expected. In fact it was actually a pretty sleepy frontera with just a few trucks idling about. Not a single scamming tramidor or corrupt official to be seen. 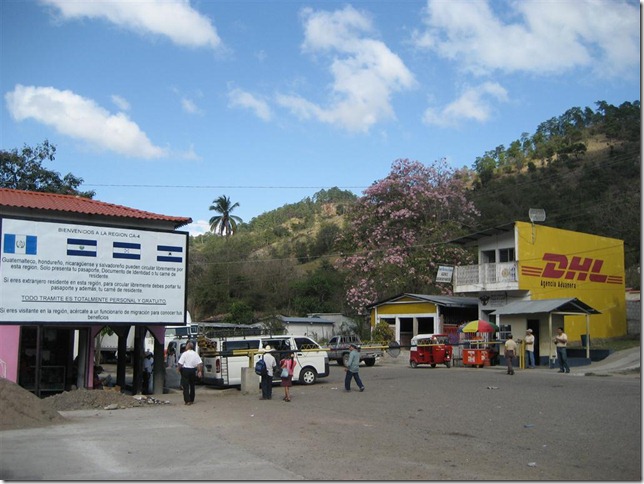