Warning: session_start(): Cannot send session cache limiter - headers already sent (output started at /home/prelac/public_html/wp-content/themes/twentyeleven-child/functions.php:19) in /home/prelac/public_html/wp-content/plugins/simple-twitter-connect/stc.php on line 33
 Finally! The moment we have all been waiting for… Corrupt cops in Honduras! | Home on the Highway

Stocked up, fueled up, and ready for adventure! We hit the road to the Moskito coast.

The directions we had were shaky at best and we ended up taking a wrong turn into a small sketchy neighborhood. Before I got a chance to turn around we found ourselves smack in the middle of a police-checkpoint in this barrio. 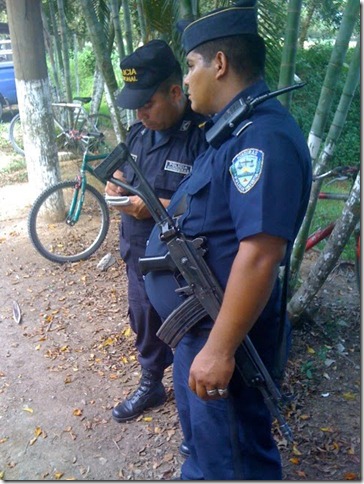 The checkpoint was manned by 6 young fellas. They see us coming and pull me over. Young guy asks me the usual paperwork questions and then says he needs to search my truck… OK. We haven’t been asked to search our truck yet in Honduras so I thought it a bit odd.

Then he asks me to get out of the truck. Again odd, I haven’t been asked to get out in quite some time either.

So I get out and he puts me up against the truck and gives me a crappy cursory pat-down. The first pat-down I have received since leaving the U.S. Obviously he wasn’t looking very hard since he doesn’t notice I have a damn buck knife in my pocket. He starts asking me if I have drugs, where we are from, did we come here to buy drugs. We are conversing in spanish, I am telling him… No we are just lost, we are tourists bla bla blah.

He continues to search the truck, I roll down the rear-window, he opens the cooler and comes back around to the front of the truck. He then tells me “Having a cooler full of beer during Semana Santa is illegal…”

I say… Por Que? (Why?) and he says because the police say so…

So from this point on we know this guy is trying to take us for a bribe and we mentally shift gears.

As sick as it sounds… We have been preparing for this moment now for so long we are almost excited to get a chance to have a go at some corrupt cops. The game is a-foot!

He rechecks all of our papers and tells us our vehicle import papers are only good for Guatemala (which is bullshit. Why would Honduran immigration give me an vehicle import document for Guatemala?) so I call him out on that in spanish. Surprised by our confidence. He moves on.

Then he says I need a front plate. I explain to him you do not need one in the United States and they do not issue you a front Honduran plate at the border, in spanish. He moves on again.

He starts saying I have drugs in the car, since I am from California and Californias love drugs! (I see our reputation precedes us…) I tell him we do not have any in spanish. He moves on.

The cop just keeps coming up random crap hoping we cave and just offer him cash. I keep calling him on his B.S. in spanish. He is almost smiling at this point, unable to keep the con alive and remain serious.

Eventually he just straight up starts asking for a bribe/regalo (gift). That is when we start playing the fool and immediately forget all the spanish we know….

He asks Lauren something, she replies “No entiendo”

We go back and forth for 10 more minutes with him asking me for a regalo and me saying “no entiendo” and talking to him about random nonsense in rapid fire english which really confuses him.

He keeps saying in frustration “You don’t understand my language!?”. Guess he forgot about the 1st half of our conversation that took place entirely in spanish…

Eventually he calls his buddy over who just tells him to knock it off. Young Cop #2 takes our paperwork from Young Cop #1 hands it to me and tells us to get going.

While every case dealing with the police is different…we have found, as have most others, if you play along with the cop long enough, waste their time, or just downright confuse them. You can get out of most bribery incidents without paying a nickel.

NOTE: This was our first bribe attempt in over 5 months of travel and 20,000+ miles covered. The majority of police/military we have encountered have been friendly and helpful.