Sorry it has been so long since we have updated, We have been caught up in a whirlwind of travel lately. (This is a good thing!) We have now settled down in a beautiful place called San Pedro De Laguna, Guatemala. We found a great spanish school that rents out nice little cabanas for $25 a week! We are right on the water and loving it here. I am lounging in the shady hammock outside, typing this up and listening to the birds chirp in the trees. Behind us about 100 yards is gigantic lagoon ringed by 3 massive dormant volcano mountains. Have we found paradise already!? Perhaps… Needless to say we have decided to stay here for a month taking spanish lessons and slowing down the pace.

Now back to our regular scheduled programing!

After our hectic day in Oaxaca we decided to put some miles down. My friend Doug runs a community center for a small barrio in Cancun. We had told him we were going to stop by and help him out so we set our sights for the tip of the Yucatan peninsula. As we descended from the top of the Oaxcan mountain range towards the isthmus of Mexico the change was immediately apparent. The pine trees gave way to jungle  and the the cool dry air was now thick with humidity. Toto…We’re not in Kansas anymore. 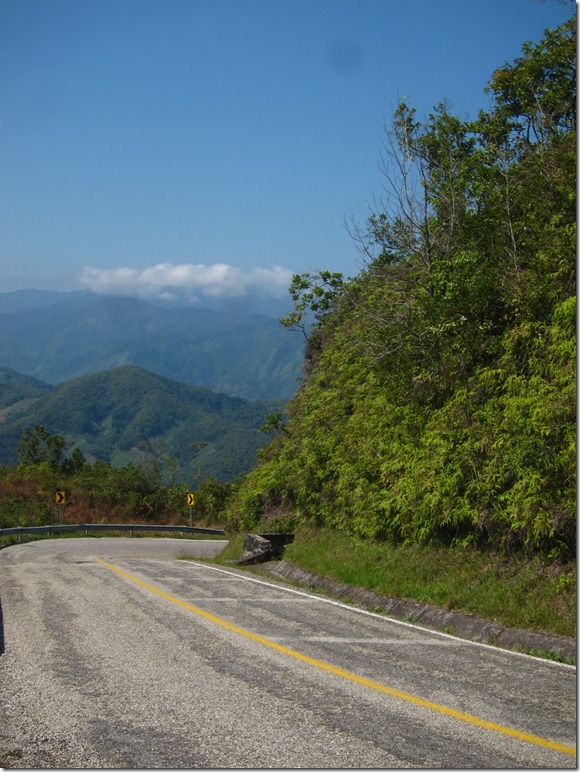 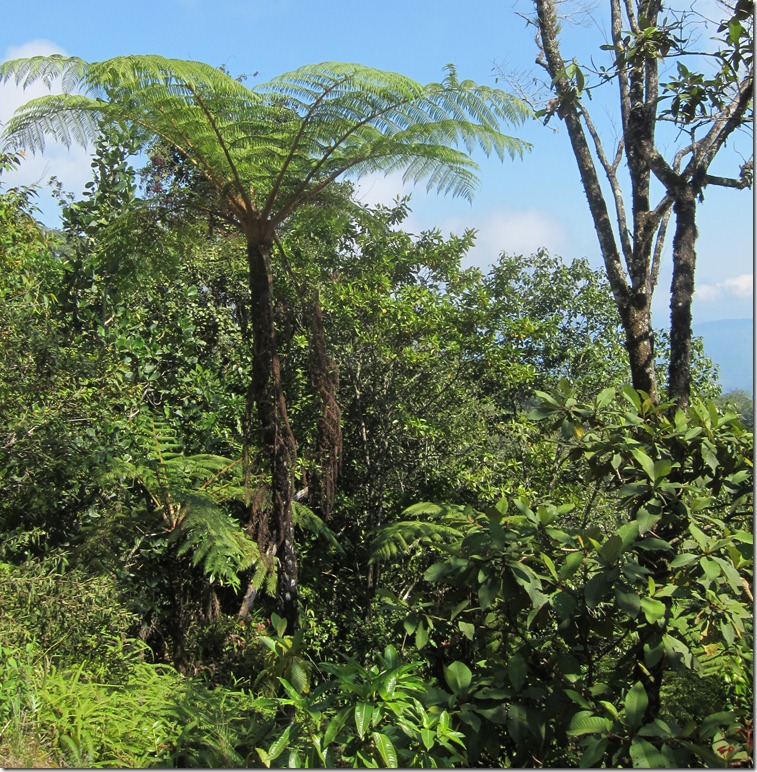 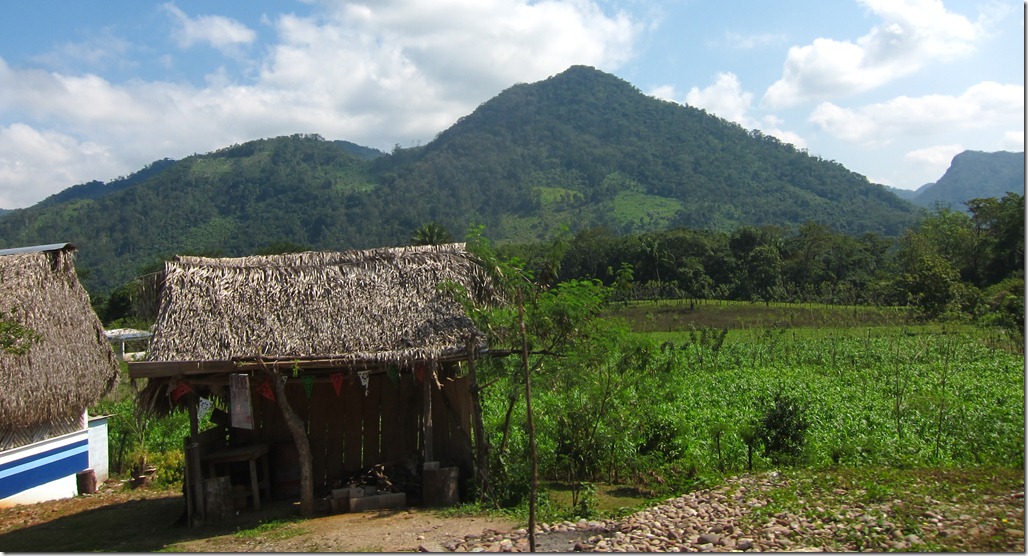 On our way up to Cancun we stopped into the city of Villahermosa. A primarily industrial city with not much in the way of scenery. However it did have a nice museum/zoo combo that sounded interesting. The “Parque Mueso La Venta” combined both native Yucatan animals and excavated artifacts from the nearby Olmec ruins of La Venta into one attraction. Plus it was only $3 which the budget surely appreciates. 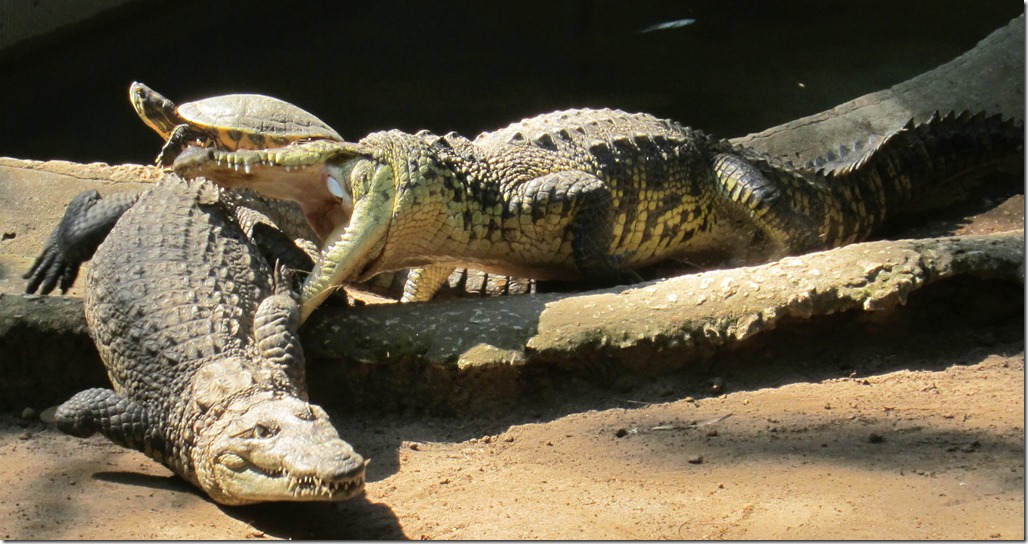 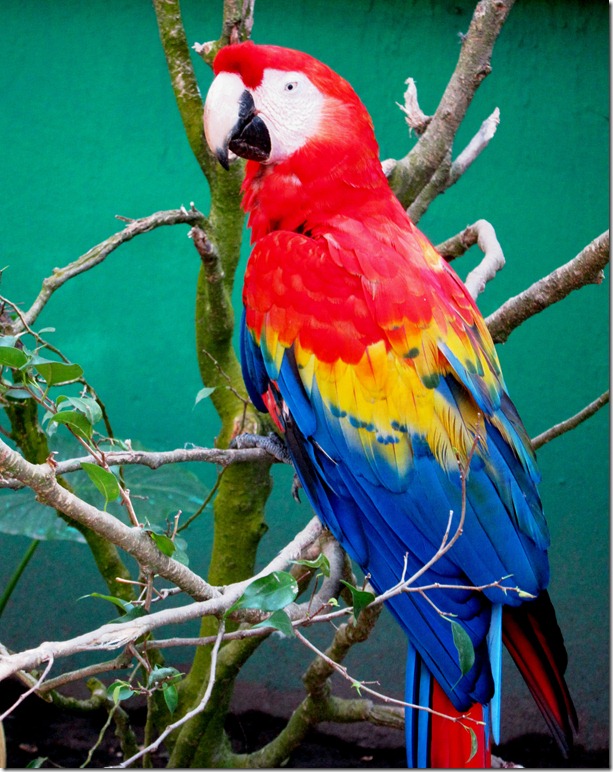 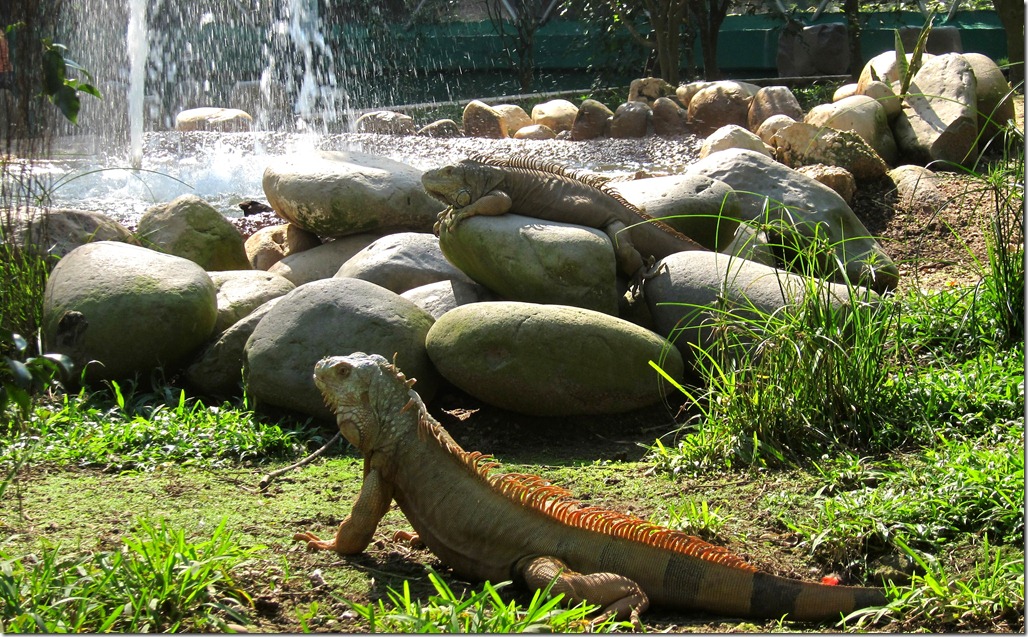 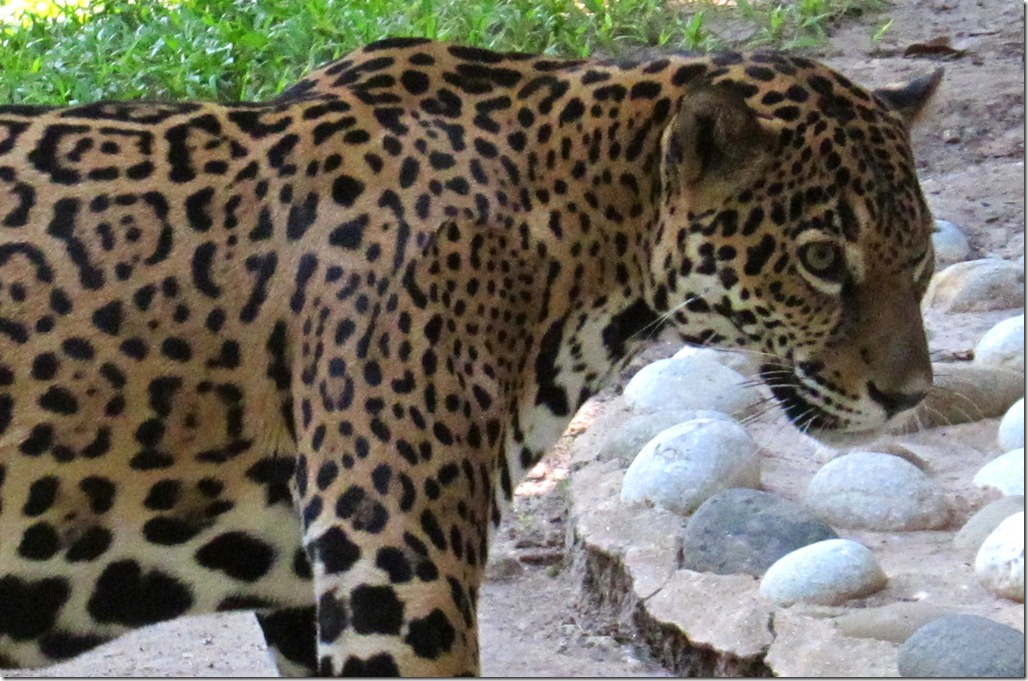 Lauren goes to the bathroom and when she gets back she hurriedly tells me “I think something escaped from the zoo!” and drags me to come look. Figuring she has been standing in the sun too long I reluctantly follow, and sure enough… something did escape!

or so we thought… We went and grabbed some employees and drug them over to look. They just took a glance at this obviously escaped zoo convict and started laughing. Ummm… hello? Aren’t you going to put it back in the cage!? Well… it turns out these odd looking foreign creatures are basically a Yucatan raccoon and are more of a pest than a zoo exhibit. As we walked around the rest of the zoo we ended up seeing tons of them digging and climbing all around in the jungle. Man… we are such gringos.

The Olmec artifacts were very interesting, the La Venta ruins site is just up the road from Villahermosa. In the 1950’s they were planning to bulldoze the ruin area for crop land.  An archeologist took charge, relocated most of the ruins to Villahermosa, and started the “Museo Venta” to educate people on the ruins site and Olmec heritage. 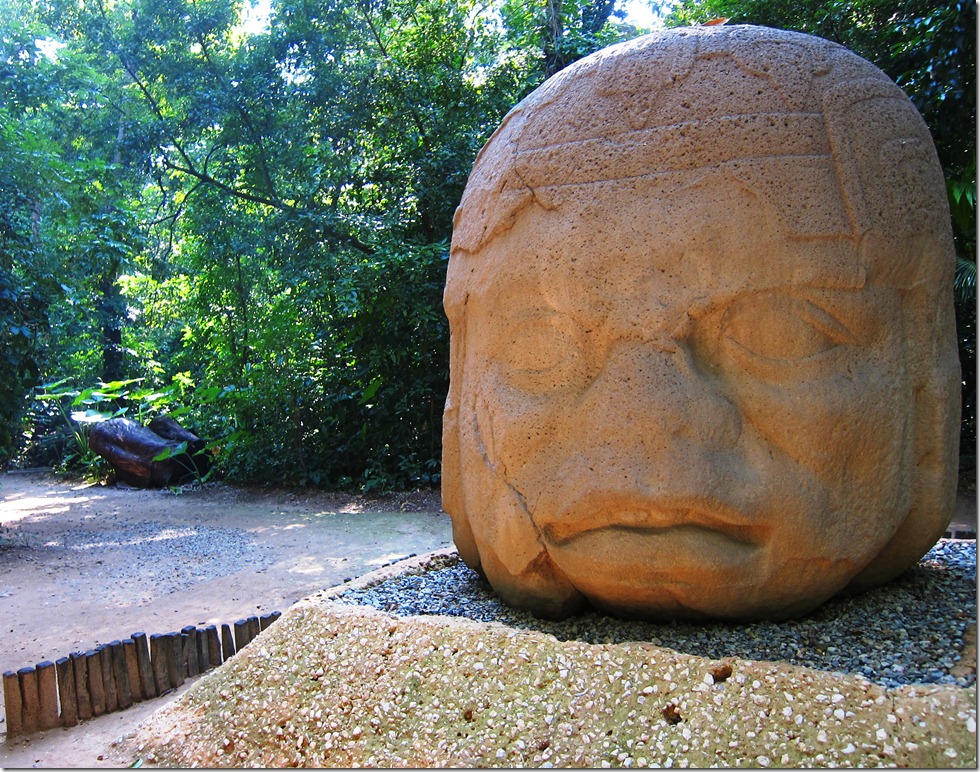 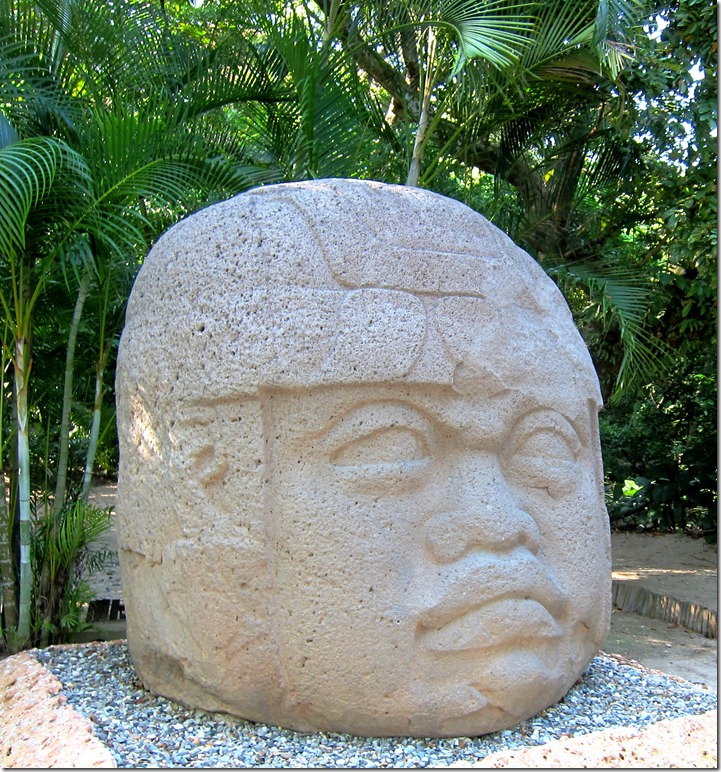 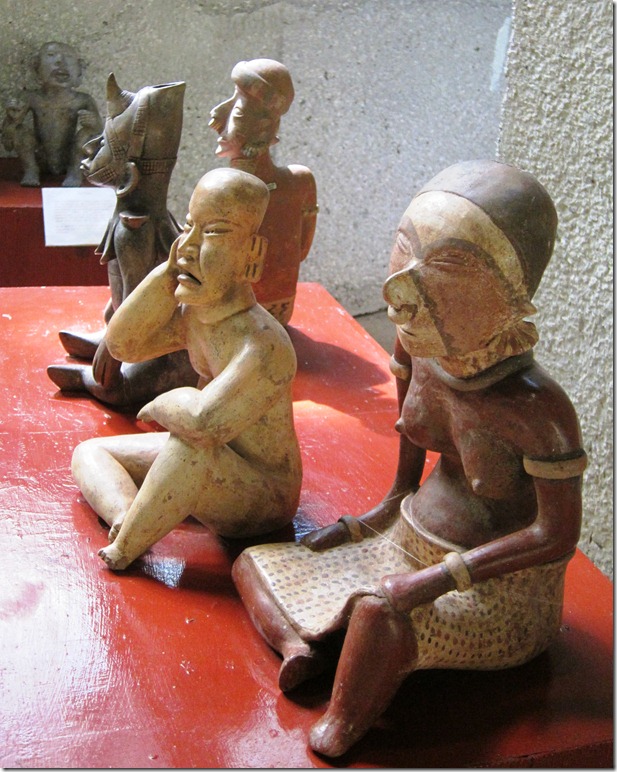 Creepy stone sculptures of a priest with serpent crown carrying a child from the underworld. 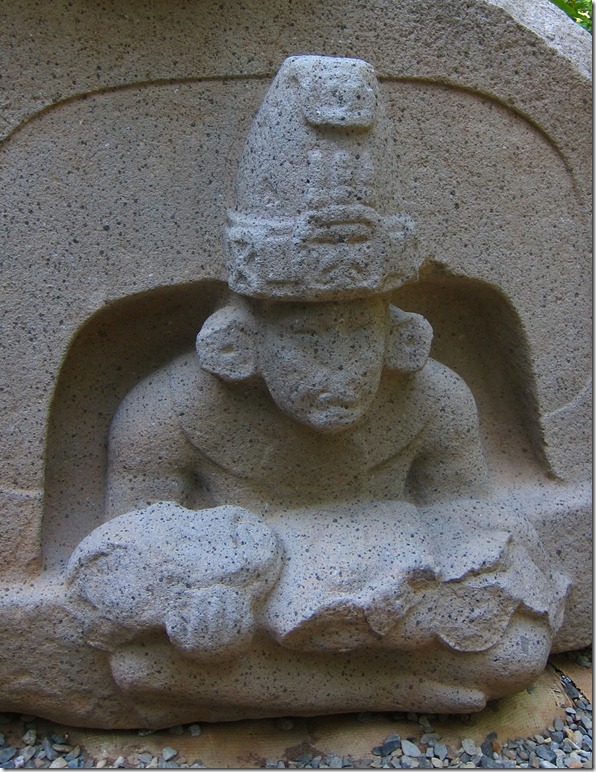 More priests being weird with kids… 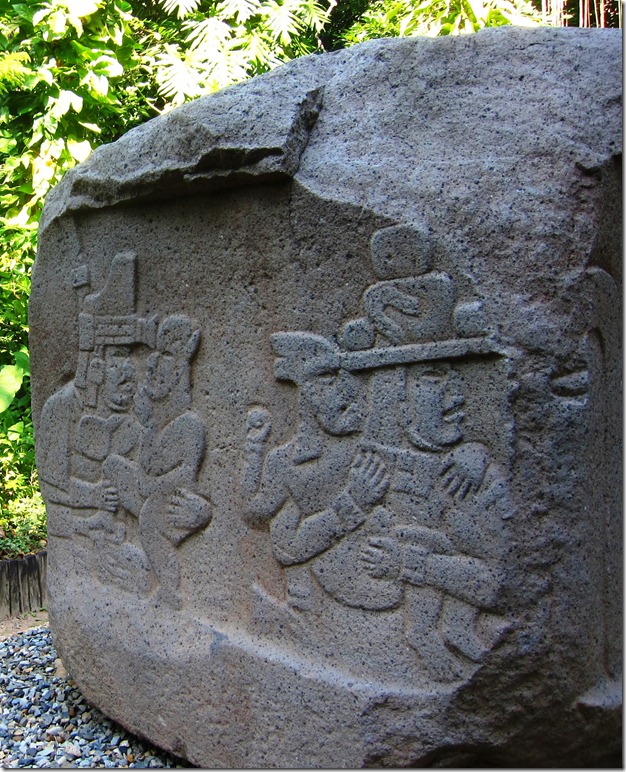 Saw tons more of our “escaped zoo animal” running all through the jungle. They are called Coatimundi’s. 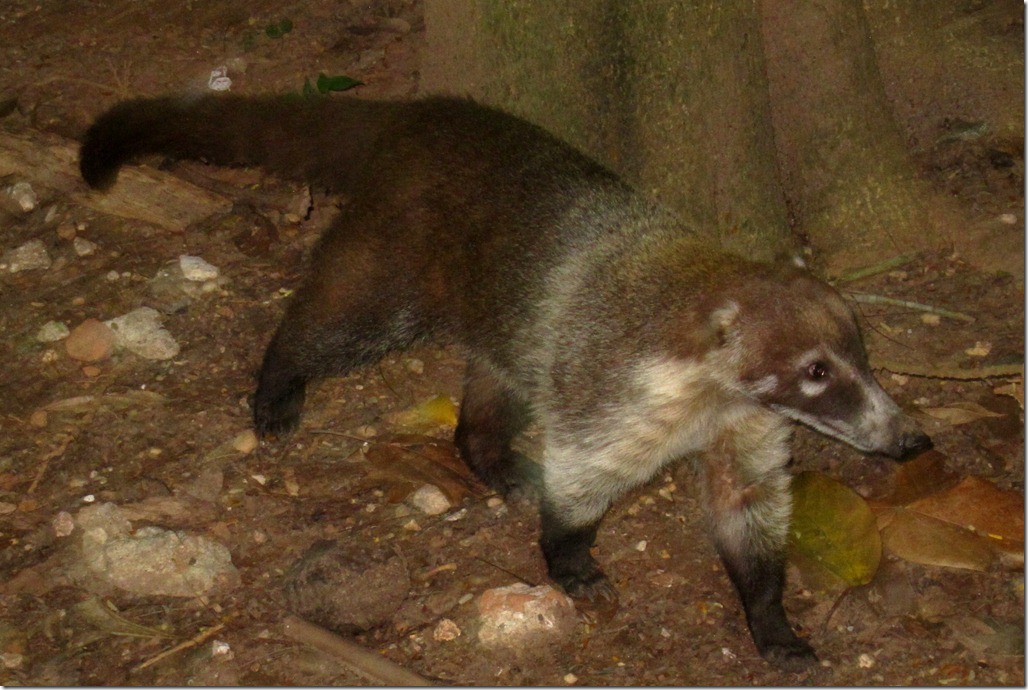 Growing up in Florida I have seen my fair share of Gators, I’ve seen the “World’s Largest Gator” at least 4 different times in 4 different tourist traps. But I think I may have finally found the actual “Worlds Biggest Gator”. Rumor has it that this thing eats Coatimundi’s by the bakers dozen, as the zoo keepers try to rid the park of the pests they toss them into the gator pit for dinner. He was a BEAST. I would say easily 17ft-20ft long.

Note the turtles in the pic are huge snapping turtles, not any baby sized Red Slider nonsense. 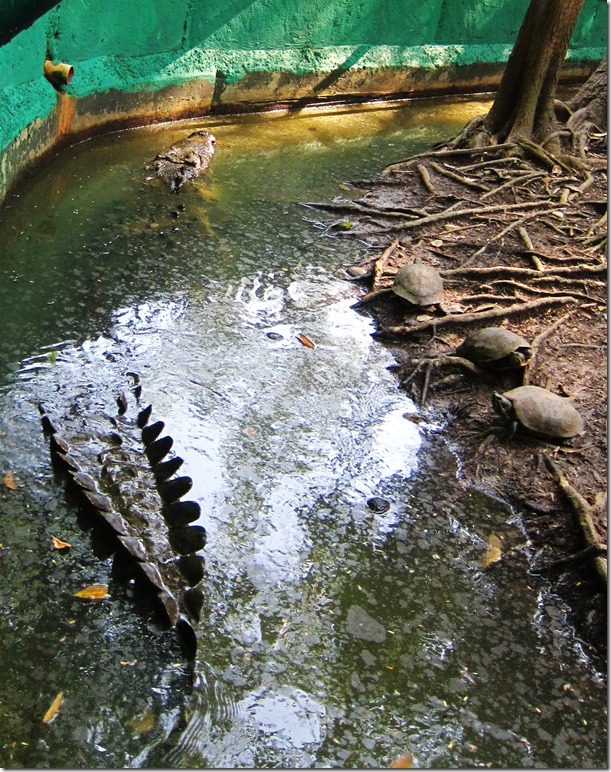 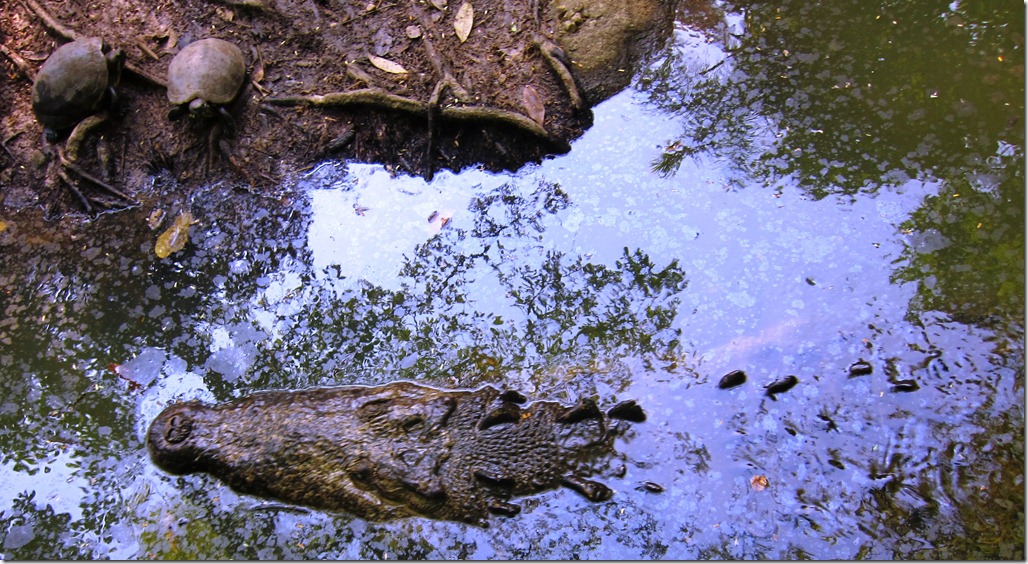 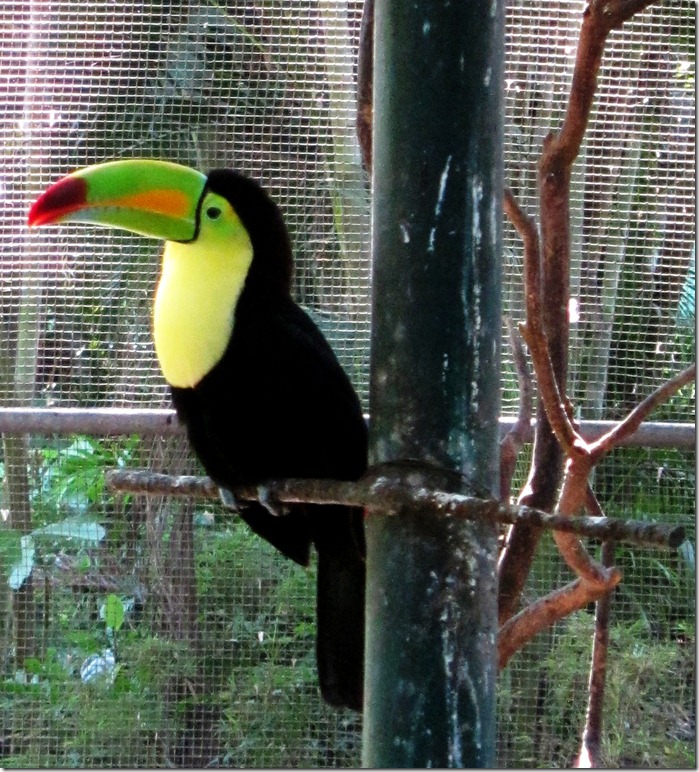 We packed up from Villahermosa and headed deeper into the Peninsula. We have visited a few ruins on the trip so far but we have heard that “Palenque” was one of the larger more magnificent ruins in Mexico. After learning about the Mayan Emperor Pakal, his tomb, and his jade mask in Mexico City, we were excited to see where it was all discovered.

The Palenque ruins were discovered in the 1800’s, explored and excavated over the centuries by a few different archeological groups. It is a beautiful Mayan site set deep in the jungle. They have done a great job with the excavation and restoration. The site and grounds are wonderful to tour around. 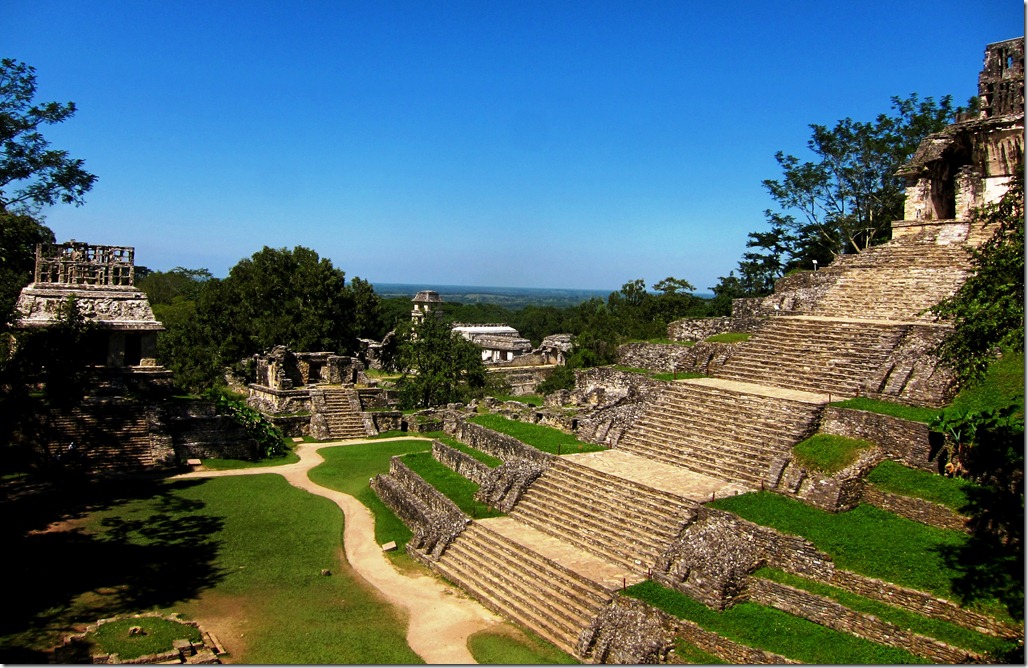 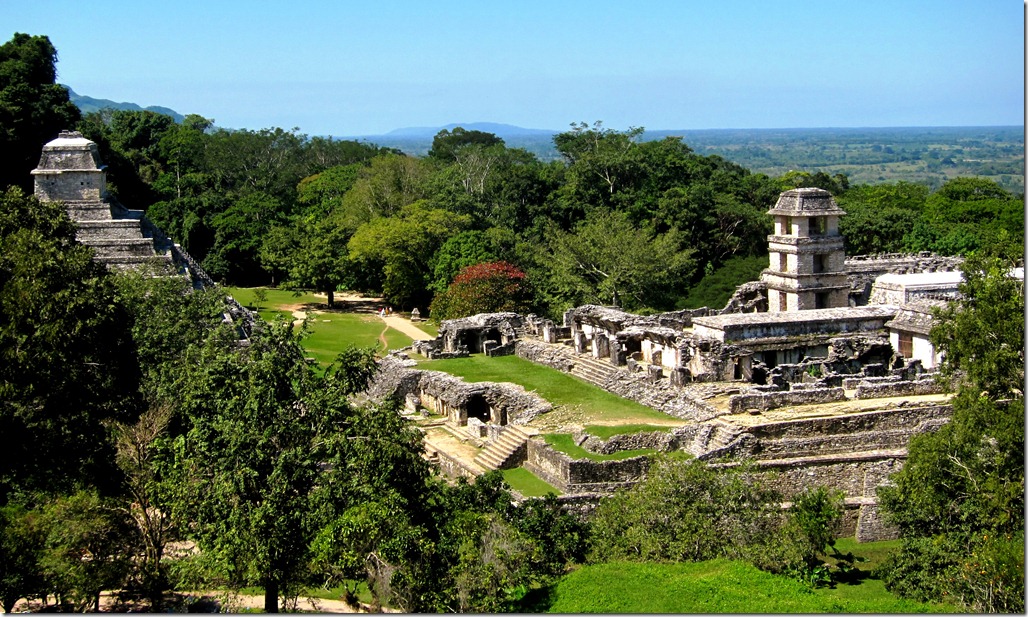 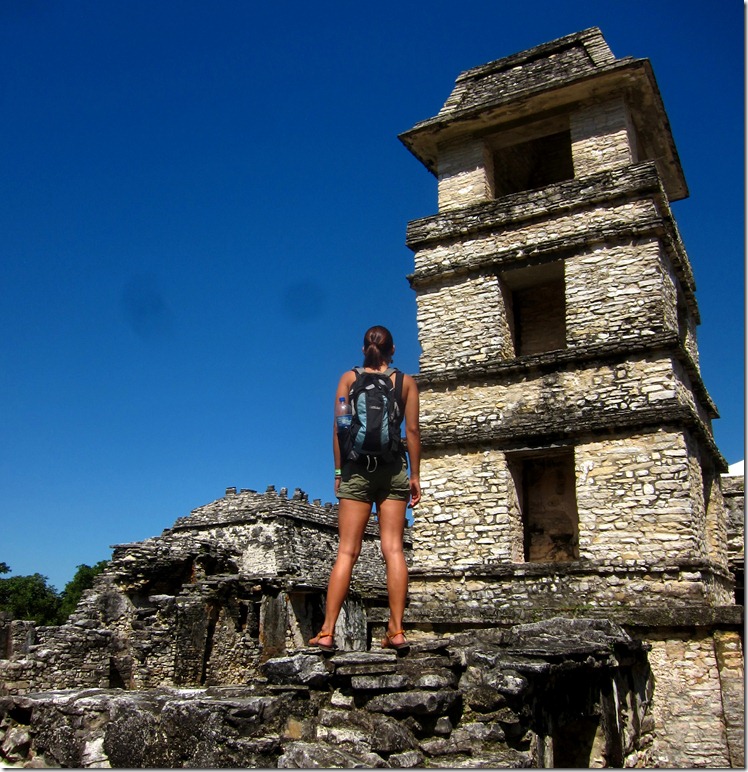 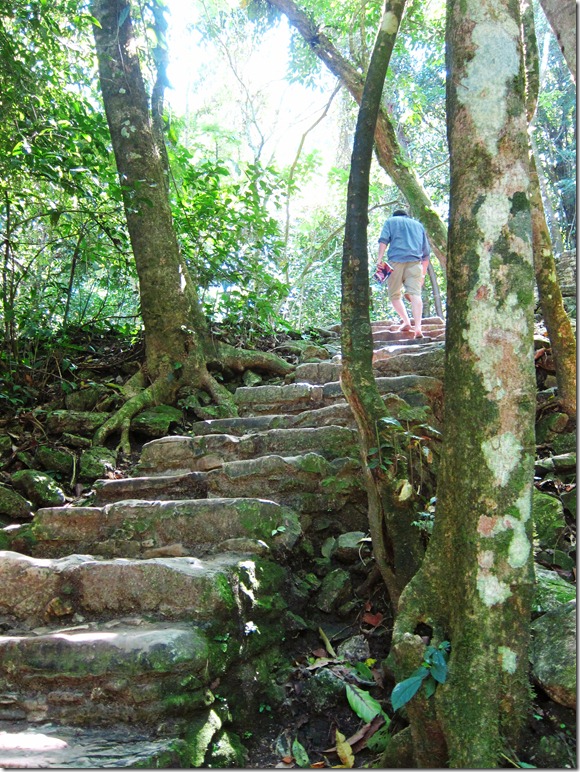 Although the site has been worked on for 200 some years, It wasn’t until the 1950’s that Alberto Lluhlier discovered Pakal’s tomb buried deep inside the temple. When he removed the (7 ton!) sarcophagus lid he discovered Pakal’s body dyed a deep maroon red and covered in magnificent jade jewelry. It was one of the largest archeological discoveries ever made on the Yucatan peninsula. 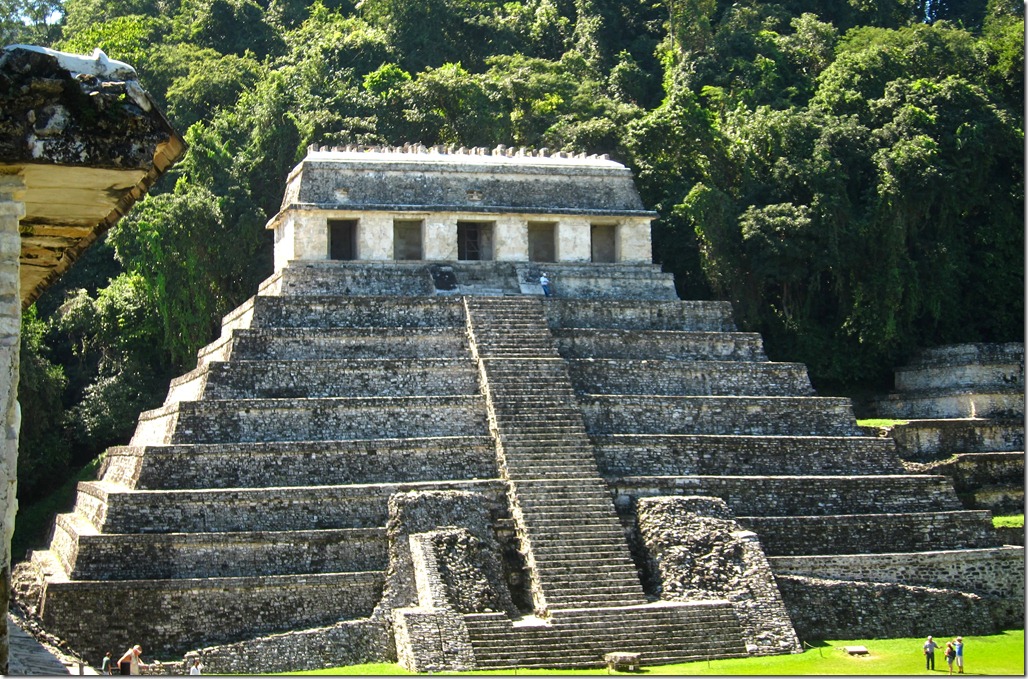 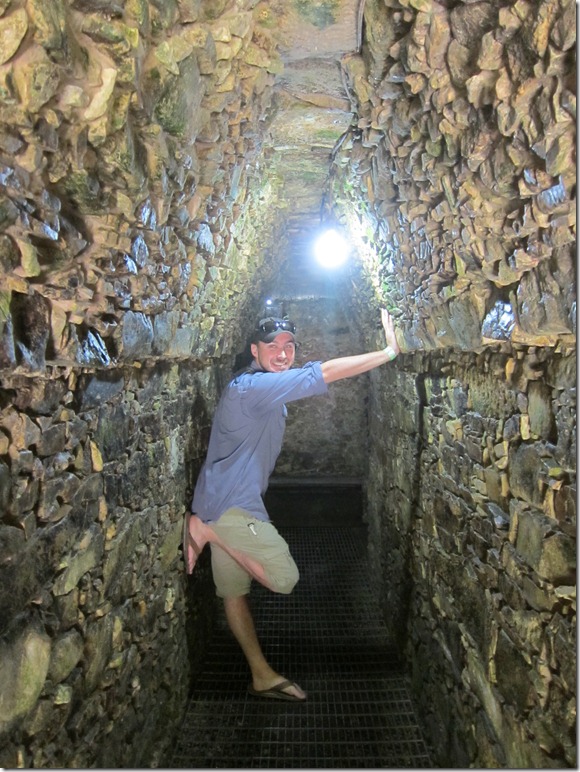 Not Pakal’s Tomb, We weren’t there at the correct time to tour his tomb 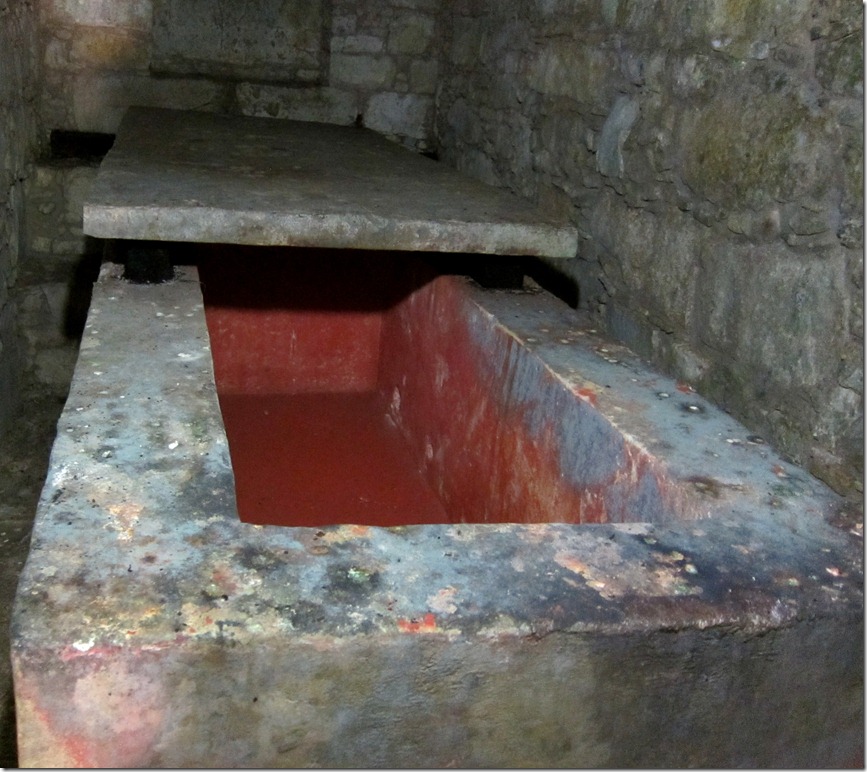 Alberto Lluhlier was so dedicated to the Palenque site he was actually buried there and has his own tomb. A little odd we thought, but the guy did love himself some mayan ruins. 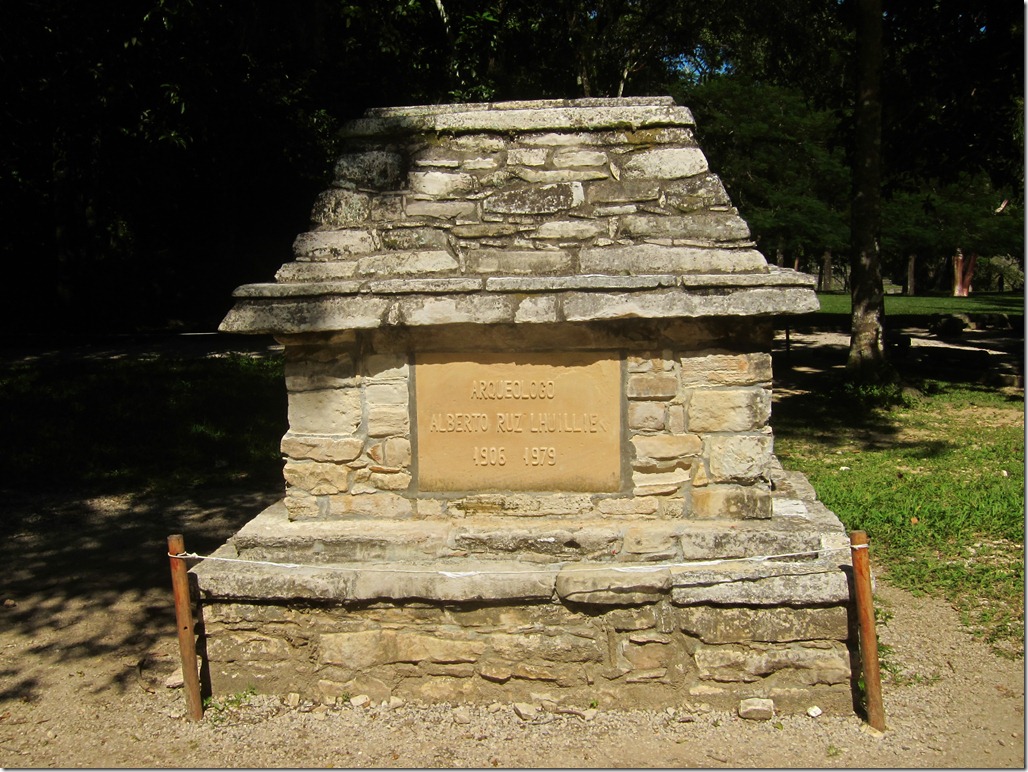 I heard heard rumor that there were Mayan bathrooms at the site. I think this is a ancient Mayan Shitter. Either that or I just desecrated thousands of years of history to make a poop joke. 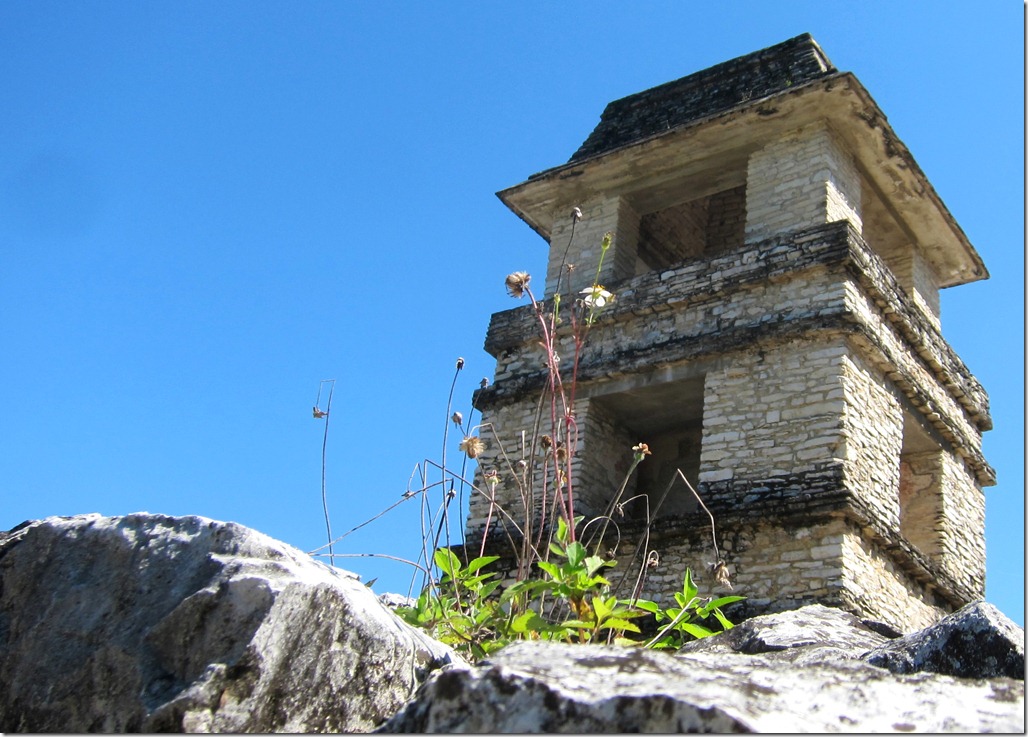 They say this site supported over 25,000 residents at its peak. Needing a consistent water supply the mayans built underground cisterns and redirect nearby streams, creeks and rivers into manmade underground aqueducts. 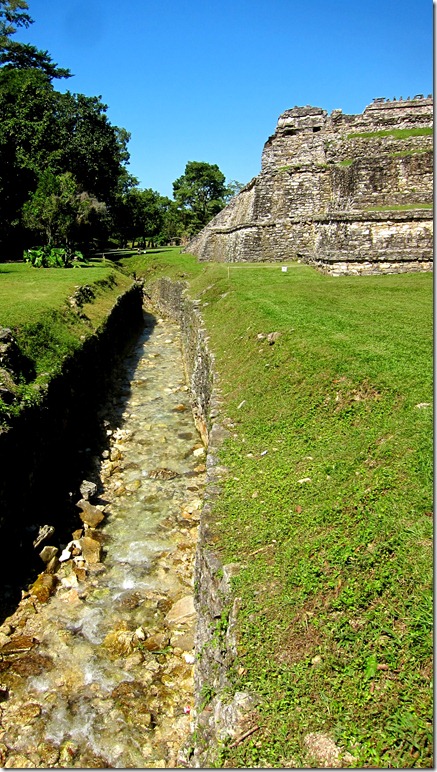 Rapey looking bed in the catacombs underneath the palace. 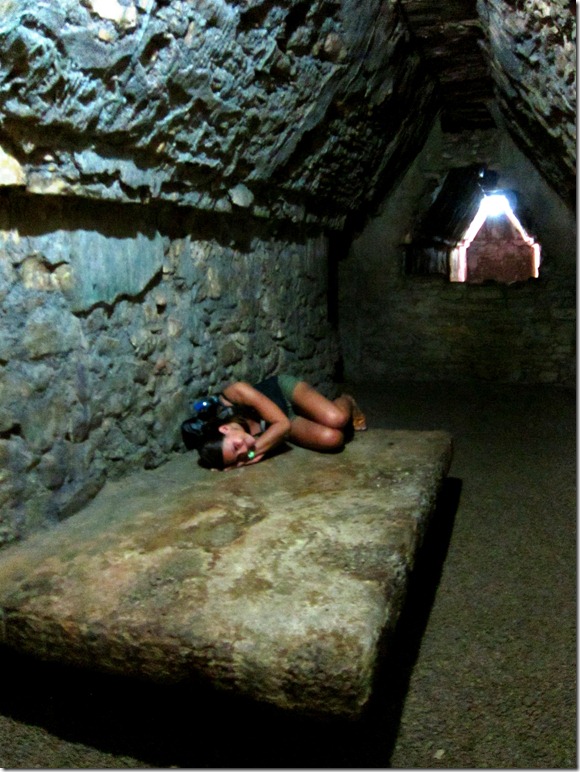 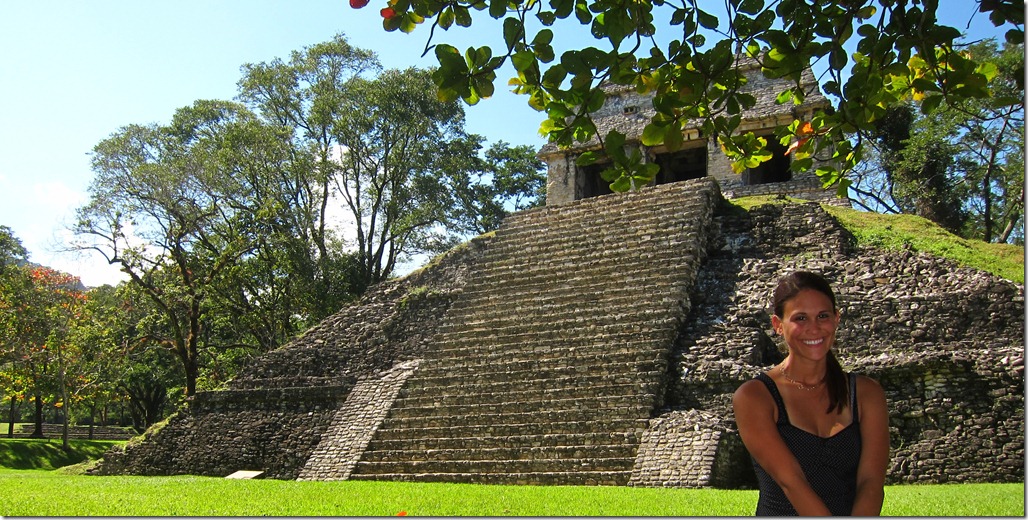 We spent most of the day touring the ruins and then jetted towards the Gulf Coast, It had a while since we have seen the ocean, temperatures were starting to rise inland and we figured a nice seabreeze was in order.

Found a nice camp spot right on the beach, a few miles away a sugarcane farm was burning, creating one of the most spectacular sunsets we have seen. 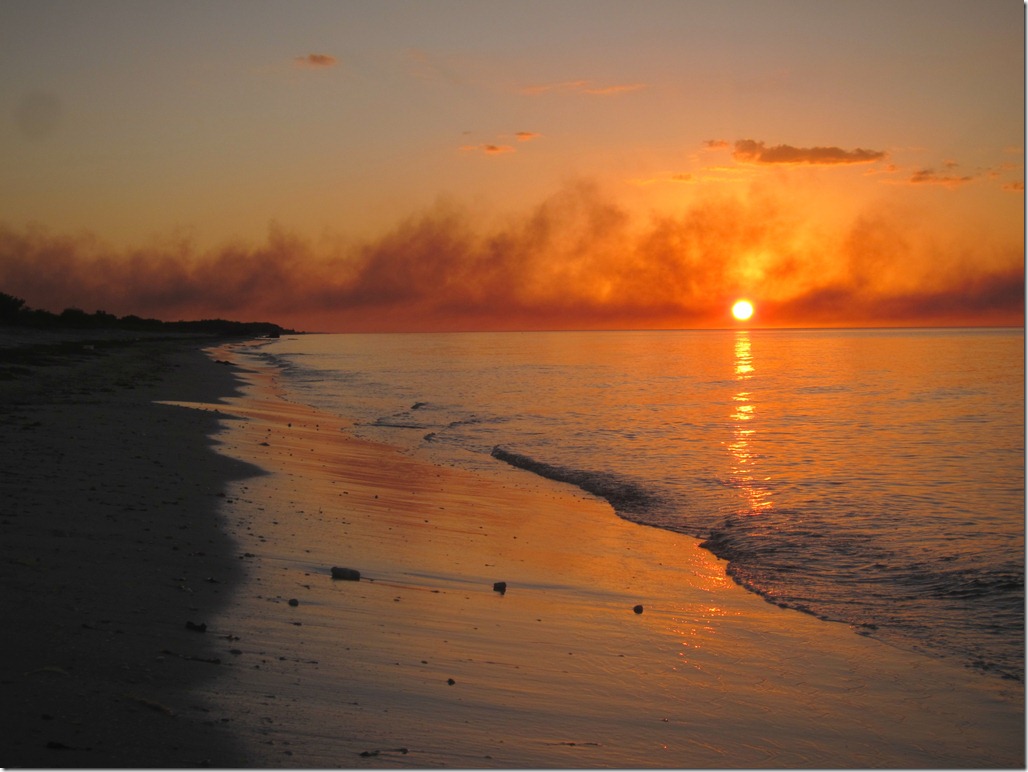 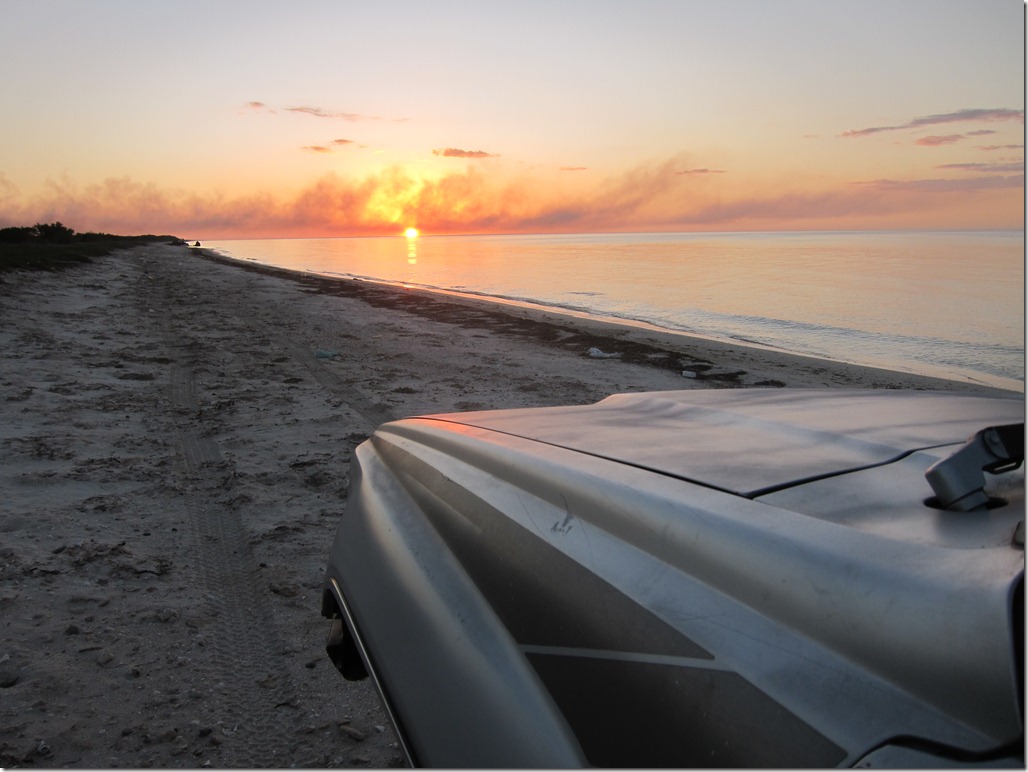