We settled into to life at our apartment. It was nice to have some routine after being on the move for so long. We would wake up in the morning, make some coffee, and hang out on the roof of our apartment watching the waves, the sun, and life waking up in our little town of Huanchaco.

It didn’t take long for word to trickle out on the streets that “Home on the Highway” had a sweet beach pad and the visitors soon started rolling in.

Our first friends who came were our Canadian buds we had recently met in Ecuador. We spent lots of time strolling the town together, drinking Trujillo beers, and sitting on the beach. Standard Hunachaco life.

We paid a visit to Trujillo’s largest ruin, the infamous CHAN-CHAN… ChanChan is a massive ruin covering over 20KM of land. It is actually the largest Pre-Columbian ruin in all of South America. The main complex is surrounded by giant adobe walls and divided up into various sections inside for ceremony, farming, and everyday life. At its peak over 30,000 people lived in this city. It was the capital of the Chimu empire.

The adobe walls are full of intricate patterns occasionally depicting animals as well.

ChanChan was kind of cool at first, however, after strolling along through the mud hallways eventually it gets pretty damn boring. We usually shy away from guides and prefer to discover a place by ourselves, I feel ChanChan needs a guide to do it justice.

We are headed out of the mud fortress when we come across a Peruvian family who has drug its 2-year old little boy out to see the mud. Surprisingly, the boy is not at all interested in staring at brown walls for hours at a time and its throwing a straight up tantrum as his clearly annoyed parents continue to drag him through the ruins.

At one point the crying kid walks in front of me and plops down directly in front of my feet as I am walking, not thinking much of it and not wanting to punt the kid, I just step over him and keep on strolling.

Looking back… perhaps that wasn’t the best move.

A few seconds later I hear loud shouting behind me, I turn around and find a red-faced 5ft tall Peruvian man holding his kid in his arms screaming his ass off at me. His overweight equally red-faced wife behind him also yelling. Surprisingly, for the first time all day, the baby is silent…

I glean from the screaming that he is mad that I walked over his kid, I apologize but the man won’t let us alone. He starts cursing at me, screaming about how Americans come to their country and disrespect them. Lo Siento Senor, No queiro problemas. At this point his loud shouting had gathered quite a crowd all standing around to watch the show. I stand there a while more getting threatened by this little red-faced man until a security guard comes over and tells us our group of 4 gringos we should probably leave. As I eyeballed 20 Peruvian males all around us itching to let out some pent-up aggression, I agreed.

We all hauled ass outta ChanChan laughing at the absurdity of the situation. Hey, at least we got some excitement out of the place!

Our Canadian friends hit the road and our next set of visitors arrived, the infamous Team LifeRemotely.

We had not seen each other since Costa Rica, and had lots of catching up to do. We quickly fell back into our routine of gluttony and excessive libations.

Jared went crazy finally having access to a real full sized kitchen and cooked up all kinds of deliciousness. Kobus busted out his world-famous empanadas, while Lauren and Jessica provided moral-support from the sidelines, their enthusiasm fueled by the finest of boxed red wine (“Gato” is the finest if you were wondering…)

It was during Life Remotely’s visit that we first discovered our downstairs neighbor had recently acquired a new kitten.

Unfortunately my neighbor is not home much and the very young kitten was left on the backpatio alone for most of the day and night. He spent most of his time meowing and crying for some attention. I would sling down some tunafish from the second-story window from time to time to shut him up, but inevitably he would start back up again. Eventually the cat would cry himself hoarse and start doing this weird squeaking noise. Hence we named this random cat whom we had never actually met, Squeakers.

It was a combination of being tired of listening to Squeakers whine all damn day, a lot of rum, and Jared’s comment of “If you don’t rescue that cat soon he is going to have permanent severe mental problems” that sprung us into action.

Unable to access the first floor patio, we had to somehow catch him from the 2nd story. We rigged up a wicker basket, some rope, and a can of tuna fish trying to create a sort of trap for the cat. Hoping he would jump into the basket and we could pull him up. 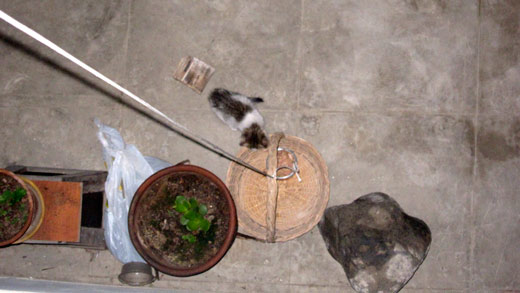 We were able to get him into the basket but he would bonzai jump out as we were trying to bring him up to the second story. Not wanting to be a part of a kitty suicide we shelved the plan. Oh well, back to the drawing board.

Brad and Sheena were onboard instantly with the cat rescue operation. We upgraded from our crappy wicker basket to a high-sided bin and soon enough. We had him!

As luck would have it our neighbor came home just as we are stealing the cat. As Lauren and Sheena pull the cat up into our apartment. I run downstairs to explain to our confused neighbor why she sees her cat being carted away to the 2nd floor in some old plastic bin….

I don’t think she really understood my horrible spanish but she got that jist that we had just stole her cat and she didn’t seem to mind too much. OK?

He was one dirty and pissed off cat, the girls, of course, instantly fell in love.

We put a shine on him and he cleaned up pretty good, I usually HATE cats, but even I had to admit he was pretty damn cute.

We burned through the days playing cards, taking advantage of having an oven, and playing with the cat.

Brad is a master Nacho chef. He loves them so much his blog is named after them. Well not really, but the man does love some nachos.

We said goodbye to Brad and Sheena and prepared for our next adventure. Lauren’s friend is flying into Lima in just a few days. We will meet her there and then drive to Machu Picchu.

First leg of the trip… the 9 hour drive from Huanchaco to Lima.

We hit the road south and soon were cruising through giant sand dunes and the beautiful desolate shoreline of the Peruvian coast.