Carly spent the rest of the week hanging out with us and touring around San Pedro. One thing she wanted to do while in Guatemala was to visit some Mayan ruins. In a country where over 50% of the population is indigenous Mayan it would be sacrilege to not visit one of their ancient sites.

We got to googling and did tons of research searching for nearby ruins to check out but came up bupkis. During our search however, we did find the Iximché ruins just outside the town of Tecpan. I knew we passed Tecpan on the way to the airport in Guatemala City. We figured we could head out the night before Carly left, drive to Tecpan, wake up early, tour the ruins, and get Carly on a plane around noon. Sounds like a plan to me!

During our spanish class we told our teachers about our plans to drive to Tecpan that night.

“Oh, you picked a very special night to go to Iximche.”

“Tonight is the Mayan new year!, of course”

… Of course? Our teachers explained about the Mayan Haab calendar, the long count-calendar, Tzoltin, equinoxes etc etc. The Mayans expounded upon 5th century BC knowledge of time and came up with a system to track/predict important events long before they ever heard of a Roman/Julian/Gregorian calendar. It is actually a series of several different calendars combined into one all-encompassing date keeping system.Pretty cool and complicated stuff.

Apparently it was so complicated that there were only a few people in ancient times who could actually understand it. These calendar readers were important nobleman in the Mayan society and worked closely with the ruling class. Mayan rulers used the power of the calendar to assert dominance and power over their cities/countrymen. If the king can predict what day the sun will be blocked by the moon, he must be talking to the gods and we should do what he says.

While I was very confused with the whole explanation (It’s hard enough explaining concepts of time in english, now try it in a language you can barely understand!) I managed to glean that tonight, March 21st, was an important night. Our teachers said the ruins will be open all night with shamans and elders performing rituals, blessings, and celebrating the new Mayan year. We were in for something special. Excited with the news we ran back to Carly. We packed her stuff and hit the road around 5PM for Tecpan.

The drive to Tecpan was uneventful. I was kind of hoping to see droves of natively dressed Mayans making a pilgrimage to the ruins. We drove through the sleepy town around 9PM and headed towards the ruins to check them out.

We arrived at the Iximche ruins.. A construction crew was busy building a stage for some reason, but no signs of any ceremonies. We wandered past the construction workers and into the actual ruins. No one was out checking any tickets or anything at this time of night. We ambled down the pathway until we realized we were actually walking on-top of Mayan ruins. It was so dark we couldn’t tell until we noticed the mud/brick walls and carved steps. Cool stuff, out here on our own ambling around ruins in the middle of the night.

There was no moon that night, It was pitch-black outside. Not sure if that happens every Mayan New Year or just a coincidence… With the accuracy of the Mayan calendars I am leaning towards it not being an accident.

We kept seeing small groups of people walking off into the woods. We asked a group if they were headed to the “ceremonias”, They said yes so we followed them down the random path.

As we walked the path we heard soft chanting steadily growing louder and louder. We pushed through some trees to a clearing to find this scene awaiting us… 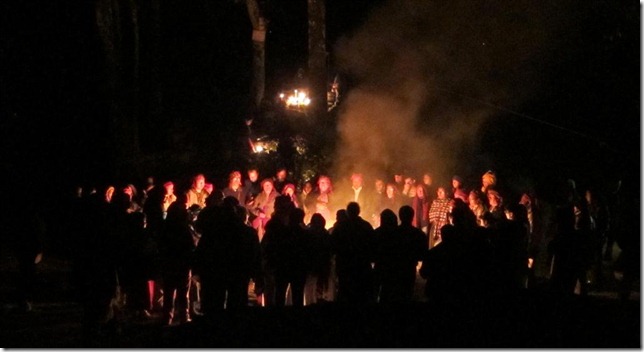 Mildly intimidated we slowly worked our way into the circle. We were the only non-Mayans there. It was pretty obvious we were tourists but we did our best to be respectful and remain out of the way. The Mayans did not seem to mind us and were friendly. We were discreetly snapping photos under our shirts, eventually realizing that the other Mayans there were taking pictures of the whole process. Clearly this was a rare occasion and an experience for some of them as well.

The shamans were building the ceremonial circle when we first arrived. On top of a giant round stone platform they laid out an intricate circle design on the ground with sugar. Then layer by layer they started filling and building up the circle with various offerings. Cinnamon, honey, sugar, rice, maiz, avocados, coins, incense, candles, Quetzelteca!, beer, you name it. All things they were thankful for in the previous year. The entire time the shamans are chanting various prayers. This is all taking place in Mayan dialects so we have no idea what they were saying. The building of the circle was a beautiful and meticulous process. 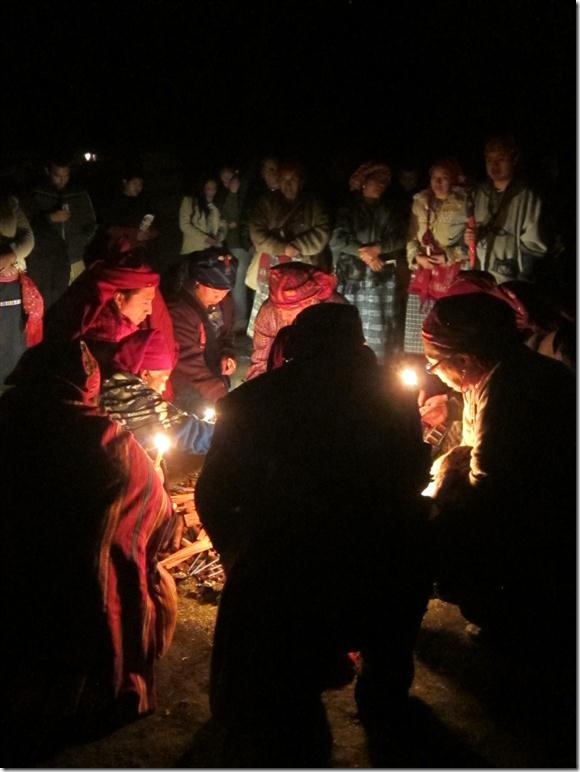 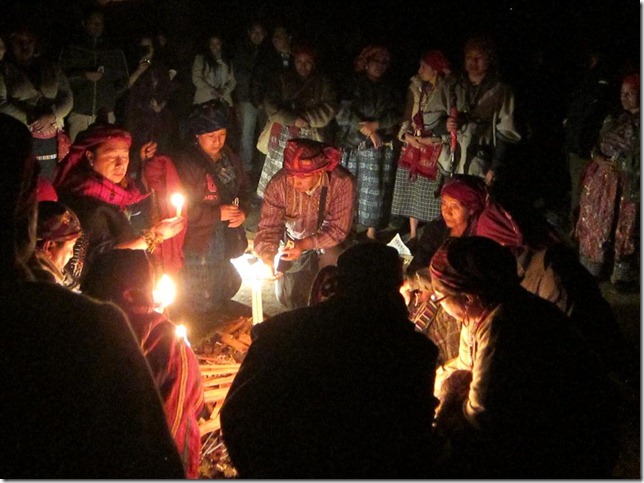 We got a little vid of the initial process, you can hear the live traditional music being played in the background.

After the circle was completed one of the elder shamans got up and gave a speech in Mayan and then translated it into spanish. I believe the jist was that it is important for the Mayan people to preserve their culture, teach it to the children, and educate others about it. He described things they were blessed with and things they had to look forward to in the coming year. He thanked everyone for coming to the ceremony and then got down from the platform.

The shaman headed back to the ceremonial circle and began to light the candles in the circle. Meticulously lighting each candle in a specific order North, South, East and West. Once all the ceremonial candles were lit he said another prayer and lit some small pieces of wood in the circle which set the entire thing ablaze in a huge fire.

Once the fire was going, he spoke with the other elders and said something in Mayan to the crowd. The entire crowd dropped to their knees all facing to the North and began chanting and praying. Not ones to be left standing around like a bunch of bozos we followed suit. 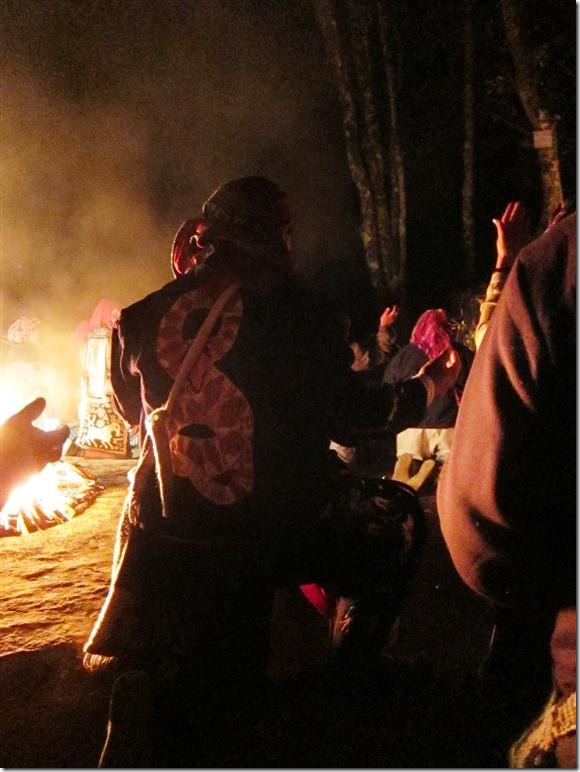 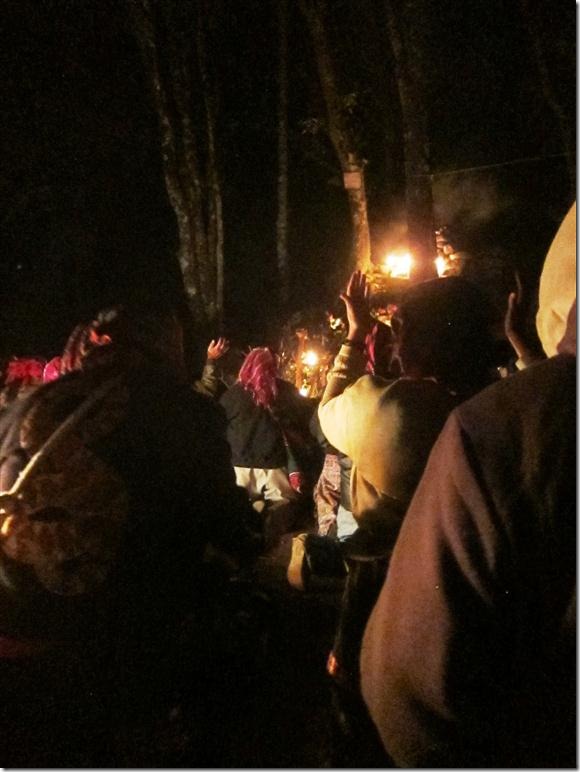 After praying and chanting for about 5 minutes in the North direction. Everyone leaned over and kissed the ground. And turned to the South. This process continued until we had prayed in all directions North, South, East, and West. Emotions were high, lots of people crying and whispering prayers. A very devout moment. We were privelged to be attending and witnessing such an event. 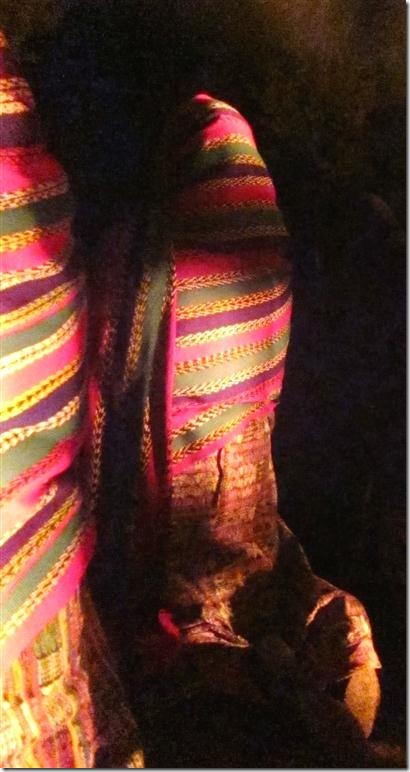 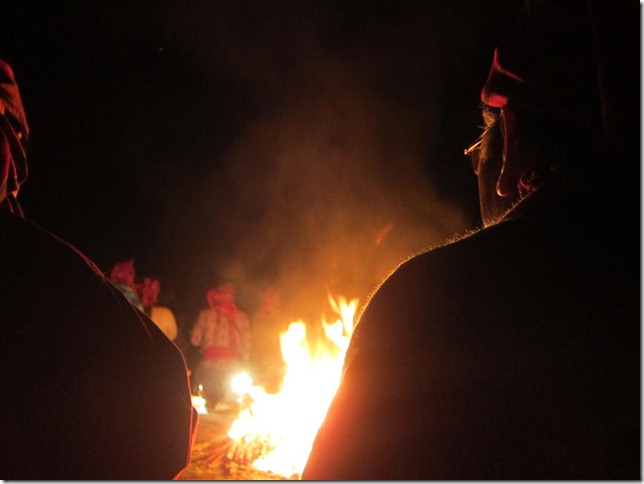 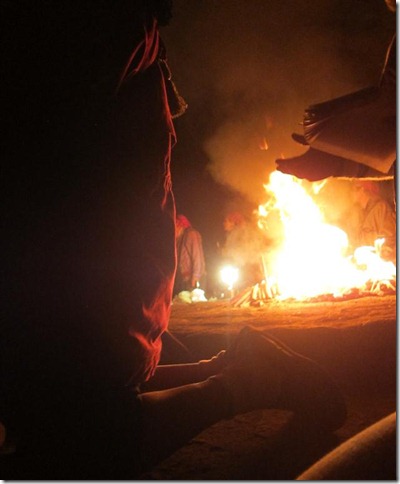 Eventually the prayers ended and the band struck up again, playing lively traditional music with flutes, drums, and marimbas. A few Guatemalan men and women danced what looked a helluva lot like an irish jig around the flames of the fire for a while. Everyone was pouring beer and quetzecal into the flames, as well as having a nip or two themselves. The men were smoking MASSIVE cigars. They were huge, as big around as a papertowel roll. The ladies were trying their best to light up cigarettes. (It was obvious none of them ever smoked as I watched them struggle with matches and trying to figure out how to light the cigarette, One lady set 1/2 the damn cigarette on fire in her hands and then started puffing on it!)

As the fire would die down someone would emerge with what I believe was sugar? and dump it all over the fire to bring the flames back. Eventually more wood was brought out to keep the party going.

So… Lauren, Carly, and I are standing around having a good ol’ time watching these Mayan’s party it up. Excitedly discussing our new once in a lifetime experience when all of the sudden we hear. SQWWAKK! The distinctive sound a chicken. Uh oh…. Looks like the parties just getting started! 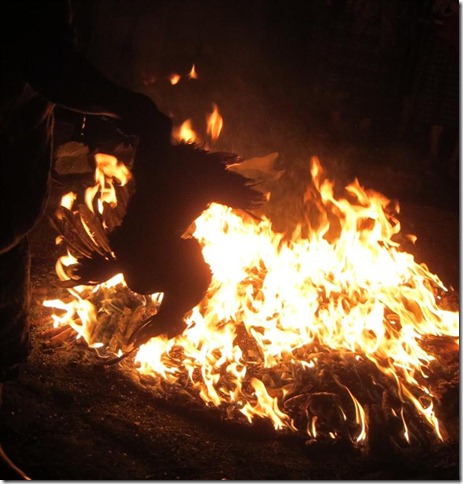 A Mayan lady comes out of the shadows with a live flapping chicken with obviously broken legs. (why we heard the squawk) She begins rhythmically waving the chicken over the crowd and the fire while chanting prayers. I give Lauren and Carly the “oh shit!” look. Game time! 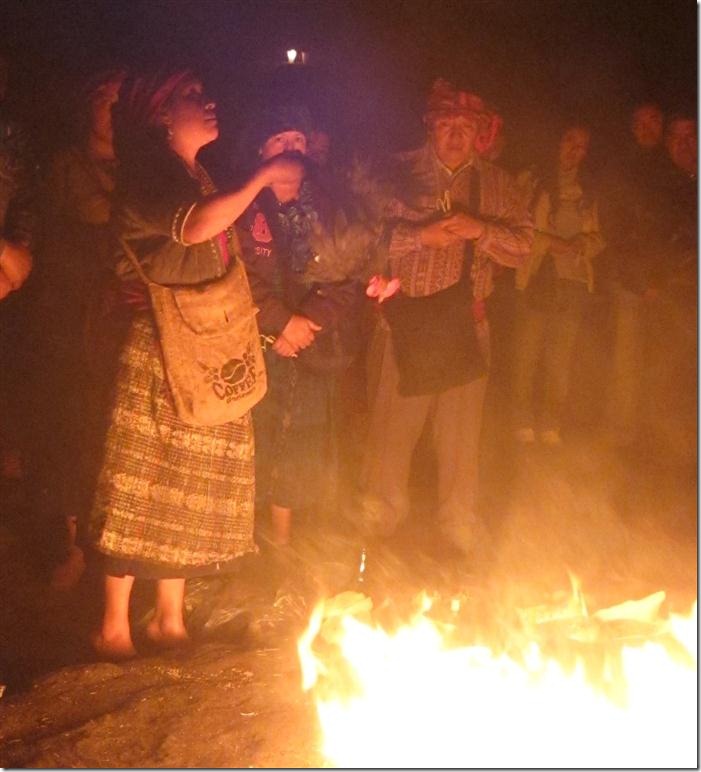 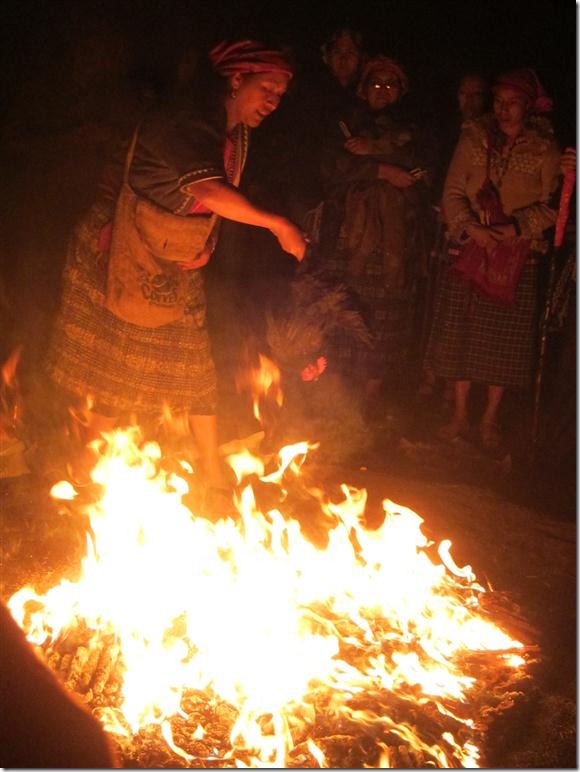 Yes, We got it all on video. Check it out if you would like. Watch for the man holding up the chicken head and tossing it in the fire around the mid-way point of the video.

Eventually the chicken is drained of its blood, cleaned of its entrails and the entire thing is flung into the fire. Quite the experience! The girls stood strong. I was proud of them for sticking it out. It’s not everyday you get to experience a Mayan animal sacrifice.

We hung around for a while after but it was now around 1AM and the party showed no signs of letting up so we called it a night and snuck away. Once away from the crowd we talked a mile a minute discussing the craziness we just witnessed. What an adventure!

We found a cheap dumpy motel in Tecpan for the night and drifted off to sleep.

Up early the next morning we headed back to the ruins so we could see them by day light. The construction crews were still there working away building something? We weren’t sure what they were building but in the confusion we were able to sneak by without buying tickets again. We proceeded to explore the ruins. 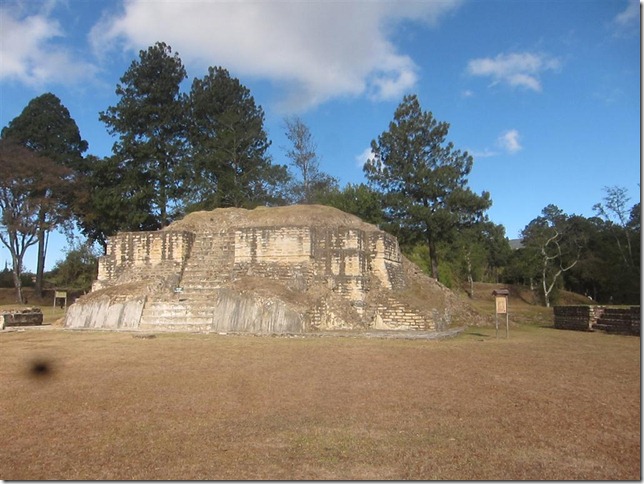 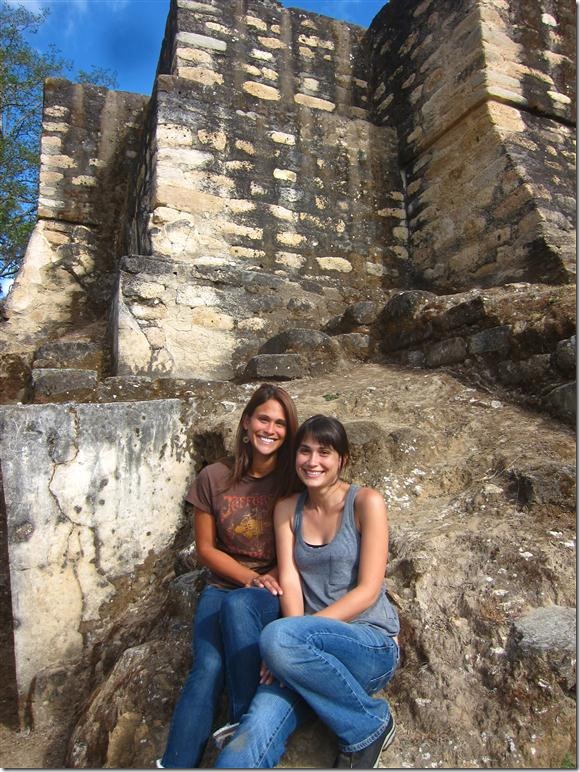 The ruins at Iximche were not that impressive in comparison with some of the major mayan sites we have visited such as Palenque or Tikal. However, they do have a very interesting history.

Iximche was a late Mayan capital city founded by the Cakchiquele mayans in 1463 A.D.. The Cackchiquele and Quiche tribes lived in close proximity to one another and were constantly battling over territory and resources. When the spanish conquistadors arrived in the 1500’s they learned about this feud. The conquistadors teamed up with the Cackchiquele promising to help defeat the Quiche tribe. Once Quiche was eliminated the conquistadors turned right around and slaughtered the Cakchiquele people, taking over their capital city in the process. In 1524, Iximche became simultaneously the last Mayan capital and the first spanish colonial city. It is recognized by many as the end of the great Mayan empire.

We returned to the site from the night before. We found the fire still smoldering and people leaving offerings and prayers. 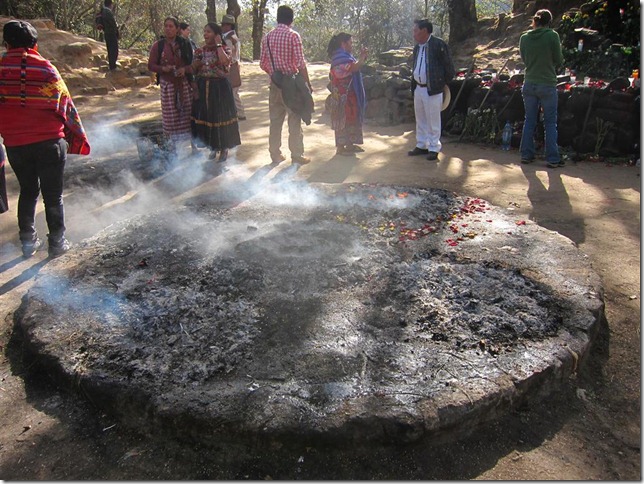 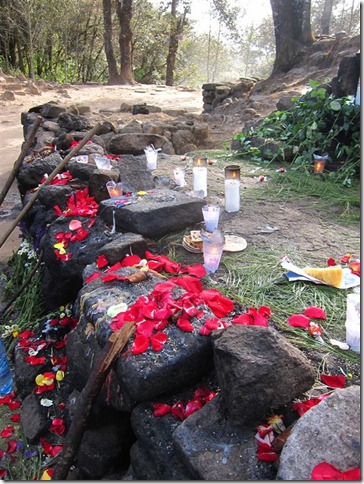 They were also interviewing a Mayan elder for a TV news broadcast. The elder was explaining the new year and how important Mayan culture is to Guatemala. He also explained that the whole Dec 21, 2012 “Fin del Mundo” was a bunch of hype made up by media/outsiders/Hollywood. Mayan people do not believe the world will end on Dec 21. On the other hand he said he does believe the world will end soon if we continue to poison our rivers, air, land, and bodies with toxic chemicals and exploit mother nature. Amen brother. 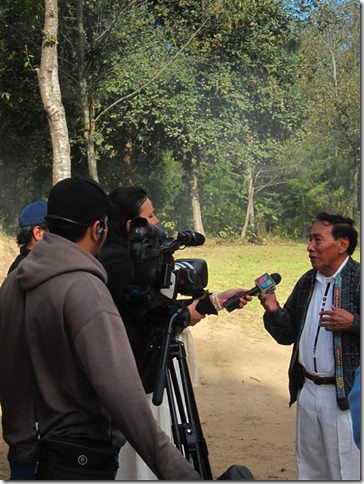 We booked it from the ruins and dropped Carly off at the airport right on time. The next day we went to class and told our teachers about our experience. They said we were very lucky and blessed to have experienced such a thing. It is rare for outsiders to get such a close look into the Mayan ceremonies. They also explained why there was so much activity and construction at the Iximiche site… Apparently the President of Guatemala was at the ruins to give a big speech on the New Year. He showed up about 20 minutes after we left. Doh!