We booked it south from the Osa and were soon at the border of Costa Rica-Panama.

Within an hour or so we had gotten all our paperwork squared away, changed some Costa Rican colones into U.S. dollars (the official currency of Panama) and drove on in. Country #9. Our friends at fromatob.org have a nice writeup on “How to cross the Costa Rica-Panama border with a truck”.

A few friends of ours had crossed the border a few days earlier and told us of a town called Boquete nestled high up in the mountains. After spending the last few weeks in sweltering jungle temps we were looking forward to a few days of cool weather. We bee-lined it for Boquete.

Boquete is a small town in the highlands of Panama. It’s cool weather makes it very popular with Panama tourists and ex-pats alike. The dormant and normally cloud-covered Volcan Baru dominates the skyline above Boquete. It is the highest point in all of Panama.

Our guidebook mentioned that most of Volcan Baru was protected national park land. It also mentioned a 4×4 road to the Volcano peak, elusive Quetzal bird sightings, and camping possibilities. We were sold. I guided the truck through the town and started snaking up through some small fincas and houses towards the volcano.

We arrived at the ranger shack around 5PM, jumped out and told the guard we were going to drive the 4×4 to the top. He started laughing. I pointed out the window to the 4runner and he said “Oh. We’ll you can try” and wrote us up some permits. I wondered just how bad this road was going to be…

We drove up the gravel road which quickly turned to dirt then to straight up rocks and boulders. Maybe the ranger wasn’t so crazy after all. We were less than 1/4 mile past the guard station when I first had to engage 4×4.

The scenery was beautiful though. Mountainous cloud forest surrounded us. We inched along up the road navigated around and over gigantic boulders. At one point we took a shortcut through a farmers land to avoid a treacherous looking section of the trail.

After about an hour of driving the sun started to set. We had only driven about 1 mile and had not found any campsites. However, we also had not seen another soul and by the conditions of the road I doubted any joyriders would be making their way up the mountain. We pulled over and setup camp on the side of the trail.

View from our campsite. We are deep in pristine cloud forest, perfect Resplendent Quetzal country.

Made a nice meal and went to sleep in downright chilly weather. It was 45F according to our thermometer. Coldest weather we have been in for quite some time. Had to brush the dust off the sleeping bags and thermal underwear!

I woke in the morning with one thing in mind. QUETZALS. 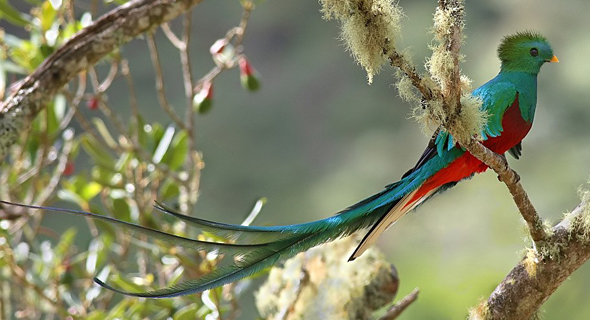 Those of you following the blog know that we have been trying to see this damn elusive bird for months now. We have traveled through 6 countries that claim to have Quetzals but have yet to see one. We did catch a glimpse of a female back in Costa Rica but the male is what everyone is after. Volcan Baru was our last chance. The rest of Panama was lowlands and they do not exist in South America. It was basically now or NEVER.

I am sitting on the tailgate sippin come coffee when all of the sudden I hear a familar bird call way off in the trees. Could it be!? Back in Costa Rica we were on a quetzal hunting tour with a guide who was making the call himself. I sneakily recorded it on my phone for later use. I jumped in the front seat and played the recording. AN EXACT MATCH! Solid proof that Quetzals do exist out here.

I get back in the truck, turn on the radio and hook the AUX cable up to my phone. Now I am cranking the call out with 750Watts of goodness. The forest fills with the sound of my female call.

I play it about 5 times and wait. All of the sudden, I hear a strange call I have never heard before. I scan the trees. I hear the call again, this time directly above me. I look up. A iridescent green bird with a blood-red breast, yellow beak and gorgeous 3ft long tail looks curiously down at me. I crap my pants.

I whisper/yell for Lauren to get out of the truck. She looks up and can’t believe her eyes. It is a damn male Quetzal hanging out directly above our home.

I fumble for the camera and pop off a few shots for proof. I knew none of our overlanding friends were going to believe us if we didn’t have solid proof. After all they have been on their own quests to see the bird for months. By this point most of them had decided that the bird is a myth and does not really exist.

Unfortunately our camera has a crappy zoom and it was pretty dark under the forest canopy. Its not winning any NatGeo photo contest but there is no doubt, MALE QUETZAL, IN YO FACE.

Excited as 2 kids in a candy shop we watched the male Quetzal as he made desperate calls trying to find this She-Beast of a giant female quetzal. After all what other birds voice is backed by a 750Watt amp?

Eventually he grew bored and flew off in search of a good time somewhere else.

We started up the calls again, this time even louder. You had to be able to hear the call for at least 1/2 mile in the mountain.

Truly amazing, after searching for months and months we finally had more male quetzals than we knew what to do with. We sat there for 2 hours just messing with the poor males as they flew in from miles around to see what was up with the new lady in the neighborhood.

Eventually they wised up and word spread quick that it was just 2 jack-ass gringos messing around in the forest and they stopped showing up. We decided to try to drive up to the top of the Volcano.

We drove about 1/4 mile further when the road degraded to straight up 4×4 rock crawling expedition. Being out in the middle of nowhere, alone, and with no ability to get ourselves back out if we were to break the truck we decided to stop and hoof it on foot. If we had a partner we would have gone further, I think the 4Runner coulda made it.

I prefer driving, but walkings OK. I guess….

The cloud forest was full of life and we saw tons of other birds, even a few more male quetzals.

Later that night we are lying in the truck watching some scary movie. A big lightning storm is raging outside. Thunder shaking the truck like a tin-can. I start to get concerned about a damn tree falling on the truck…

Back to watching the movie when *BAM* something crashes into the truck so damn loud and strong Lauren and I jump and hit our heads on the roof. It scared the crap outta us. I roll down the rear-window in the rain and shine around with my flashlight. Sure enough, a big chunk of branch had broken off the tree above and came crashing into the roof of the 4Runner.

Not having anywhere to go or much we could to about it, We hoped for the best and went to sleep, the storm stopped soon after.

A pic of the branch in the morning.

New speed dents in the cab over the driverside

We spent 3 nights up in the forest parked right on the side of the road. We saw no other people and only 1 truck, a gigantic old school Ford with 40 inch tires and chains slowly crawling up with a bunch of forest workers in the back. They gave us a thumbs-up for making it this far up and kept on crawling.

If male quetzals are what you seek. Take the recording I posted on this blog and get your butt out to Volcan Baru. They are there waiting for you!

We packed up and hit the road. Destination: Panama City.

We are meeting some new friends and preparing to ship the truck across the “Darien Gap” via container ship from Panama to Colombia.